"It's not going as well as expected."

It's not a good year for grapes. It is mainly the weather that is to blame - sometimes too hot, sometimes too wet. But the demand leaves something to be desired as well. ABC Fresh is specialized -among other things- in grapes and was wiling to comment.

"It's not going as well as expected. The demand is not particularly intoxicating. That applies not only to grapes but generally one does not have yet the impression that next week is already Christmas. Some days it is all right, on others it is a real "coma".

The grapes currently come from from Peru, Namibia, South Africa and, to a lesser extent, Brazil, but volumes were lower than in the previous year. "The week before last there was massive rainfall in North-South Africa, so there will probably be less goods at the beginning of the new year. Peruvian grapes (white and red seedless) are going this year mainly to the US market and Asia, where prices are higher. Red Globes from Peru have ha 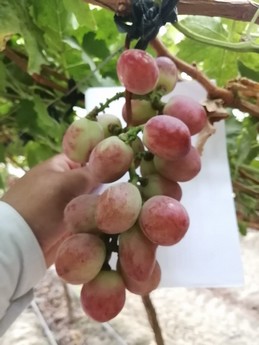 d problems with the colouring and therefore there is less shipping at the moment. In Namibia there have been large temperature fluctuations with up to 50 degrees in the past weeks. Due to weather and market conditions it is simply not ideal this year for grapes."

India, too, would soon have begun shipping grapes to Europe. But this year the rain continued until the end of October instead of September. "When the season can start is still a question; as a rule the first exports to Russia should already start at the end of October. This year it went four weeks later and with only half of the volumes."