Lots of challenges and increasing demand

Sladko Vucenovic opens each five-kilo sack of Chilean walnut kernels by hand and pours them onto a metal plate before pushing the peeled product into the packaging machine. At Seeberger, the machine fills 240 kilograms of walnut kernels in 60-gram bags in one hour. In order to deliver quality, the goods must be handled carefully, Joachim Mann, head of marketing, tells the Südwest Presse. "We give our customers a quality guarantee, so to speak. This also includes checking every container delivered - for pesticides, mould and visual defects."

While in the past, the nut business concentrated mainly on the period between September and December, today there is continuous demand. No matter whether in the morning in muesli, as a small snack at noon or in the evening on the sofa - Germans are eating more and more nuts. Every German citizen consumed an average of 5.2 kilograms per year in 2018. According to the Federal Ministry of Food and Agriculture, in 2011 it was still 4.5 kilograms.

In order to satisfy the increased demand, a certain amount of experience is needed, says Mann. As one of the leading companies in this segment, Seeberger purchases walnuts and walnut kernels from Chile, France and the USA. Almonds come from California, South Africa and Australia. "It's best to source one variety from different countries, continents or even hemispheres". Then the company, which employs around 650 people at its headquarters in Ulm, is best prepared for possible climate fluctuations. 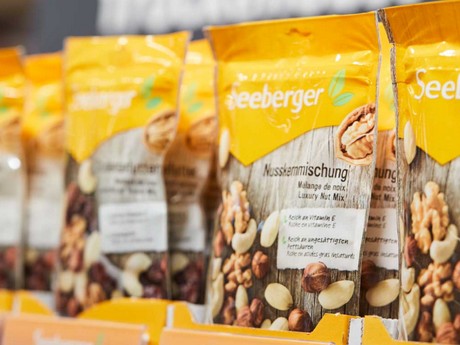 Competition in purchasing of raw materials
"Late spring frost or water problems can quickly destroy entire crops. So we need to secure alternatives." The loss of a large part of the hazelnut harvest just a few years ago meant that Seeberger did not have the nuts on offer at times. "The world market price rose by around 100 percent. We could never have passed this on to our customers." In addition, demand is also rising in Asia, as a spokeswoman for the Federal Association of the German Confectionery Industry emphasizes. This is creating more competition in raw material purchasing. The price for the fruits is made on the world market. "This is now also a speculative topic. Most of the goods are traded in the USA," says Mann.

According to the Waren-Verein der Hamburger Börse, 8,860 tons of walnuts with shells and 40,931 tons of walnut kernels were imported into Germany last year alone. In 2014, the quantity of imported kernels still amounted to 20,537 tons. In the same period, nut sales in the snack sector alone rose from EUR 734 million to 990 million, according to market research institute Statista. While consumers were still paying EUR 8.61 per unit purchased in 2015, the price was EUR 10.67 in 2019.

Increased demand in the pre-Christmas period
Certainly in the run-up to Christmas, discounters are increasingly offering almonds, walnuts and hazelnut kernels for baking. Seeberger, which is aiming for sales of around EUR 300 million in 2019, is aware of the competition from the low-price segment. "Above all, we have to be present in the high season and convince with our quality," says Mann. "You have to fight to be visible" - also in the social media. In the pre-Christmas period, almonds, walnuts and peanuts are in particular demand. "As early as August, we'll be increasing the stocks of produced goods."