The credit balance for Italian fruit and vegetables dropped sharply in the first nine months of 2019.

The economic balance, although

positive, was only 86 million euro (-83,6% compared to September 2018) while the volume balance resulted negative for 117 thousand tonnes. Speaking of quantity, the unfavorable gap continues for our exports: we imported 2.7 million tonnes and exported 2.6 million tonnes. A more significant difference can be observed in terms of value: the value of exports is 3.1 billion euro compared to an import value of barely more than 3 billion euro.

Data was released by Fruitimprese with regard to the first nine months of 2019, which are in line with the latest surveys. Exports grew in quantity by 1.8% but dropped in value (-4.2%) while imports grew both in quantity (3.9%) and value (10.8%). 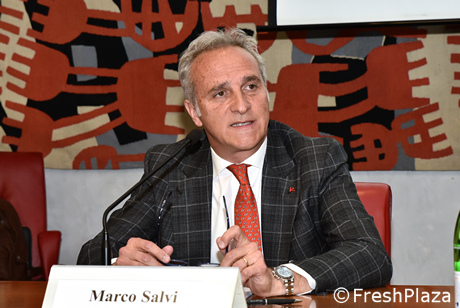 According to the data, Marco Salvi, president of Fruitimprese, noted this: "Unfortunately, the negative trends are becoming more and more frequent: the quantities imported exceed those exported and the balance of payments continues to decrease quarter after quarter. The sector has been losing value and market share on foreign markets, a combination of factors that leads to reduced investments in our country, with a consequent loss of jobs and company closures."

"For some time now this association has been reporting the loss of competitiveness in the sector: our fear is now being confirmed by the numbers and everyone is talking about it. A lot of time has been wasted but it is not too late to invert the trend: priority must be given to committing all political and diplomatic resources to the development of new markets. The Phytosanitary Board has provided precise guidelines on which are the countries to focus on. Now we must move with determination and eventually allocate public resources not only to recover badly administered banks, but also to promote our excellent fruit and vegetables in long-distance markets," concluded Salvi.