While large parts of the Australian mainland are suffering a heatwave and having to contend with on-going bush fires, the more temperate climate in Tasmania means cooler temperatures and great conditions for growing premium quality cherries. .

The cherry harvest is well underway on the mainland but in Tasmania it is yet to start.

"The season looks like being a week to 10 days later than last season due to a period of cooler weather in the first 2 weeks of December," explains Tony Coad Manager, Marketing and Sales, Reid Fruits. "At this stage we are not expecting our season will really get underway until immediately after Christmas, around the 27th/28th Dec. At this stage quality and berry size are looking very good and we expect our volumes will be similar to last season."

All of the company's producing orchards are now covered with bird/hail netting and they also have their 40,000m2 state of the art retractable roof greenhouse at the high elevation, later season Honeywood Orchard which can deliver premium quality cherries regardless of the weather conditions.

As well as the new 40 hectare Honeywood Orchard in the southern midlands of Tasmania planted over the last 3 to 4 years Reid Fruits are continuing to plant some blocks of new varieties at their main Redlands Orchard site in the Derwent Valley. In addition to this, prior to last season Reid Fruits further expanded it’s orchard operations by taking over management of another 40 hectares of high quality cherry orchard in the Huon Valley, south of Hobart.

"The weather has been quite cool in Tasmania during December up until the last few days. The weather is forecast to be warmer over the next week in Tasmania with temperatures in the low to mid 20°C range with only this Friday forecast to be above 30°C. We certainly haven’t had the extended period of extreme hot weather that has been experienced in mainland Australian states recently." 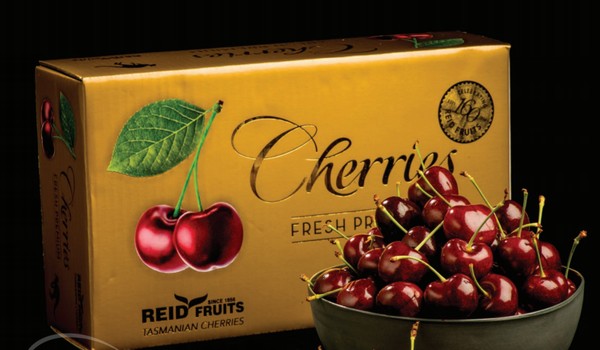 Tony said they have not noticed any change in demand due the problems affecting Chile at the moment and are receiving good forward orders from Chinese customers at this stage.

The timing of Chinese New Year this year works in well with our season as most of our production will be ready for shipment in the 2 to 3 weeks leading up to it."

Counterfeit goods are a well know problem in China and to combat this Reid Fruits have teamed up with brand and product integrity startup Laava to prevent counterfeiters from copying Reid’s distinctive packaging.

The company is applying Laava’s patented Smart Fingerprint technology on its cherry boxes for 20 export markets during the 2019–20 season. The technology uses advanced computer vision
technology developed in collaboration with CSIRO to produce a unique ‘fingerprint’ that can be scanned by any smartphone. Unlike barcodes or QR codes used in the past, Laava’s Smart Fingerprint technology is much harder to impersonate or replicate and much more secure, making it more resistant to counterfeiting. It also delivers detailed brand and product information and interactive experiences to consumers. 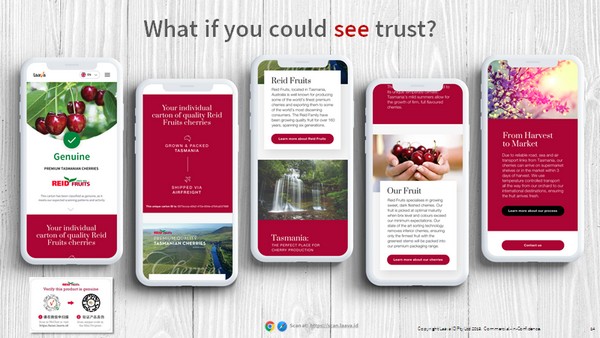 "Our Laava Fingerprints are designed with two things in mind: to enable better experiences, trust and transparency for consumers, and to ensure safety and security for brands," says Gavin Ger, Commercial Director, Laava.

"Counterfeiting is a massive issue for us and other Australian producers," says Tim Reid, Managing Director, Reid Fruits. "Laava’s Smart Fingerprint technology offers a level of secure authentication
that we believe will make it extremely difficult for counterfeiters to replicate."

Reid Fruits has spent tens of thousands of dollars to prevent counterfeiting, switching to higher quality packaging, using special processes such as embossing and foil on its cartons, introducing a
watermark on its box bases and printing its logo on the long-life plastic liners that keep cherries fresh in the box. The company has also included a seasonal, laser-cut, embossed foil sticker on the
outside of its boxes and a card inside with a unique QR code which when scanned, links to a website that authenticates the product.
"In the 2018 season, all these elements were copied within the first two weeks of the boxes appearing in the Chinese market,’ says Tony.

The QR-based technology was especially troubling for Reid Fruits, as counterfeiters simply created their own QR codes that linked to a fake authentication website (a technique known as ‘spoofing’).

"It’s hard to quantify the impact on our sales simply because we really don’t know how much counterfeiting is going on,’ says Tony. "For example, counterfeit products are being sold online at a reduced price, so that puts pressure on us to lower our price to be competitive.
Counterfeiting not only leads to a direct loss of sales for us, it also affects our importers and distributors. In 2018, one of our Chinese importers had his sales basically halved from the year before, he estimates he lost around A$400,000.

In addition to loss of revenue, counterfeiting puts Reid Fruits’ reputation at risk. ‘If the counterfeit product is of an inferior quality – and they usually are – that can have a damaging long-term impact
on our brand."