Since mid-November, a new greenhouse of 16000 m2 has been operational at Serres Magueur. “This brand-new facility actually is the renovation of our first greenhouse from 1990. We built it by following two main optimization criteria which are energy and productivity. This way, it is more energy-efficient and brighter, with rows of equal length and higher, which allows for larger volumes of air, therefore promoting a better climate and better working conditions,” explains Nicolas. 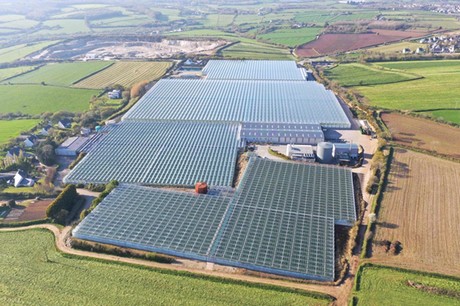 Technology at the service of productivity and energy
In order to do this, some technologies have been implemented. “The greenhouse is more watertight because the joints composing the structure are more insulating, which prevents from losing heat through the roof. The greenhouse is made up of heat shields positioned on the roof and walls. We also set up a ventilation system with ducts at the bottom of the greenhouse, allowing for better airflow, thus activating the planting while limiting the opening of the tiles. So if we open less, we also lose less heat, which helps us save energy.”

In terms of water management, the family equipped this new greenhouse with a system to recycle water with a UV machine from Priva. “This system allows for a good level of disinfection on viruses and bacteria, as well as on fungi, thanks to a UV lamp. Everything is controlled by computer. The modernity of the system lies in the fact that it is truly connected and controlled directly with Priva software.”

To install the new greenhouse, Nicolas and Thierry also used the services of suppliers like Squiban, La Coria, Podeur, as well as Horconex, greenhouse manufacturer.

The company also has a project to install solar panels for self-consumption for the electricity production in 2020. “We will equip a roof with solar panels over more than 3000 m², in order to compensate for part of our annual electricity consumption.”

The main concerns of greenhouse production for the coming years
According to Nicolas, the energy and labor will be the biggest challenges of the future for the greenhouse sector. “We currently use a cogeneration system to heat the greenhouses, under 12-year contracts which will soon end. At the moment, there is no interesting new contract. The cogenerations will then have to stop if there is no solution, which is a shame because it is a very interesting system. The gas is supplied through a network of pipes, contrary to wood, which is transported by trucks. There is very little combustion waste released in the atmosphere and the fumes are treated. As for the CO2 contained in the fumes, it is reinjected into the greenhouses to then be consumed by the plants. Abandoning cogeneration would mean going back to gas boilers, which is not economically viable. The big question is to know how we will heat the greenhouses once the cogeneration contracts end.” Cogeneration is also a significant source of electricity production in the region, knowing that every winter, Brittany is affected by a lack of electricity supply.

“The second main concern of the sector is labor. It is getting more and more complicated to recruit labor to work in the greenhouses. This is partly due to the fact that the sector is very little known and poorly evaluated. The young graduates from agricultural schools do not go into greenhouse farming, although it is a very interesting and very versatile profession.”

The family business was created in 1990 by the parents of Nicolas Magueur. Originally representing 7500 m² of greenhouses, the company now covers an area of 90 000 m². The site is composed of a relatively recent park with 4 greenhouses, built in 1996, 2010, 2014 and 2019 respectively. Producing older tomato varieties for the Savéol cooperative, such as the Marquise Noire, the company has the HEV level 3 certification, and also produces tomatoes with the label “Cultivated without Pesticides1”.

The Magueur family is currently looking for a crop manager.