Dutch onion packaging plants have been working overtime in recent weeks. Exports were well over 550,000 tons by week 47. Exporters in the Netherlands are, therefore, still busier than even the 2017/18 record season.

Even India is currently taking both yellow and red Dutch onions. There is a high demand for these onions from other markets too. This is from those markets that India usually serves.

Despite being so busy, more than 80 members of the onion trading sector took the time to go to Van der Valk in the Dutch city of Dordrecht. GroentenFruit Huis's Onion Trade Committee held its members' meeting there on Thursday, 12 December. 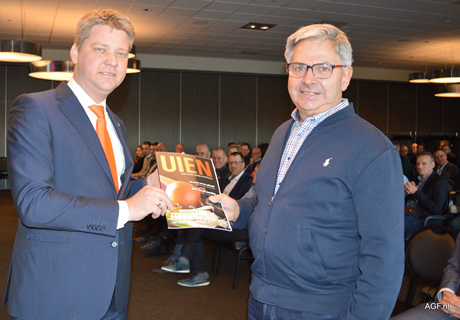 The Uien glossy magazine was presented at the meeting. The first copy was given to Kees Hoogzand of Hoza Onion traders. This company has been an onion trade partner from the get-go. It has also been active for a very long time - since 1870.

Unveiling HEROnion was another first. HEROnion is the Dutch onion sector's mascot. Yvonne lesberts and Erik Waterman introduced it. Waterman is the chairperson of the Holland Onion Association. Yvonne is from Effort Communication, the brains behind HEROnion. 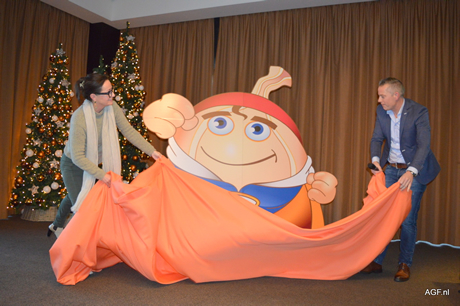 In his foreword, Chairman Gijsbrecht Gunter gave an analysis of the current onion figures. "Exports such as these means an unparalleled average of 26.500 tons per week. New export markets characterize this season," he said.

"These new markets have emerged thanks to the current shortage being faced in India. India usually exports a lot of onions, also to these markets. Bangladesh, Sri Lanka, Thailand, and the United Arab Emirates are, therefore, now buying a lot of onions from us."

"There are also markets such as Malaysia where we would be alongside India. These markets appreciate the Dutch export prowess. Especially red onions are selling well this season. There is a shortage of these on the global market at the moment," Gunter continued.

"In North Africa, Libya is, once again, buying onions. Brazil also surprised us early on in the season. They imported 35,000 tons of Dutch onions."

"We are not expecting a larger-than-usual demand from Europe. This continent has 700 million inhabitants. These people consume an average of around 7 kg of onions per person. This population is mostly self-sufficient."

In the Netherlands, there are no less than 1,3 million tons of export onions available. That means 25,000 tons per week or, in other words, 24,000 tons from week 48. A nice challenge for all of us," the chairperson concluded.

Chain-wide onion research is being done under the name, Uireka 2.0. This study has been extended. Gijsbrecht calls this an enormous boost for the onion sector. Over the next three years, parties in the chain can get moving on seven research themes. This is thanks to a budget of no less than €2,5 million.

The onions traders who were present at the members' meeting unanimously agreed to a higher financial contribution. With this, they can continue investing in, not only, research and marketing. This money can also be used to continue gaining market access to different countries.