Apple producers have for ages grappled with the humblest of problems: it’s very difficult to predict the size of a harvest, and that’s risky for an apple grower’s bottom line.

A Cambridge-based start-up called Outfield Technologies, which is associated with Cambridge Judge Business School, is addressing this issue through the use of drone technology, 3D computer imagery and artificial intelligence.

By examining trees from 30 metres above ground in summer, about eight weeks from harvest, the drones’ high-resolution cameras and computer analysis of the photos provide a far better estimate of crop yield in September or October – and this can have a big impact on an apple producer’s financial performance. 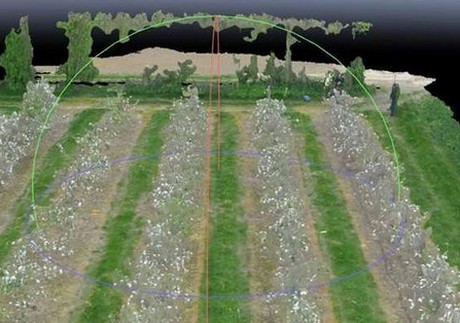 “Even a day before harvest, a producer will only know the yield with about 80 per cent accuracy,” says Outfield co-founder and commercial director Jim McDougall. “Producers sell their crop well in advance to distributors, so they have to undersell by 20 per cent to ensure they can meet their commitments. That means the other 20 per cent is sold for pennies on the pound, or it’s simply left to rot as it’s not worth collecting. That was the case with the final apple harvest in the UK last year because Poland, which is a much larger producer than the UK, had a bumper harvest so juice prices were very low.”

Outfield was founded in 2016 by Jim McDougall and Oli Hilbourne, now operations director, and is currently on the Accelerate Cambridge mentoring programme run by the Entrepreneurship Centre at Cambridge Judge Business School. The company has won several grants, including £95,000 of a larger £575,000 crop-maximisation grant from government agency Innovate UK, and is currently working with partners such as the Cambridge-based plant sciences company NIAB (National Institute of Agricultural Botany), apple distributor Worldwide Fruit, and consultancy Hutchinson.

The Innovate UK grant is focused on drone-based analysis of apple blossoms at an early stage of growth, in order to guide growers to spray blossom-thinning chemicals more precisely. Apple trees with too many blossoms produce smaller apples at harvest time, while too few blossoms result in much larger apples that are difficult to sell as consumers are used to a certain size.