The Queensland Government has today declared the majority of the state's south-east is in drought. Eight shires and councils including the Fraser Coast, Moreton Bay, Sunshine Coast, Noosa, Gympie, Redlands, Gold Coast and Logan have joined 37 other drought-declared local government areas. More than two-thirds of Queensland is now officially in drought, with only northern parts of the state and Brisbane drought-free.

The declaration came ahead of a meeting of state and territory agriculture ministers today in regional New South Wales.

Declarations brought forward
Minister for Agricultural Industry Development Mark Furner said he had accepted the recommendations of the local drought committees based on the significant lack of rain, depleted pasture reserves, and escalating concerns about agricultural water supply. 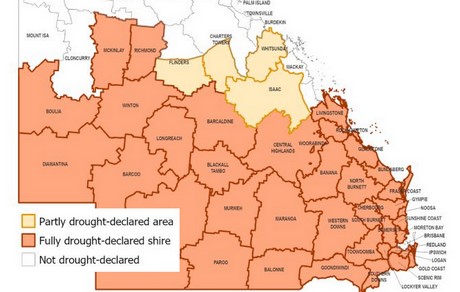 "Local drought committees usually meet at the end of the wet season in April, but due to the deteriorating conditions since then, these committees decided to recommend the areas be drought-declared from December 1," Mr Furner said.