Papaya crop an alternative for intensive horticultural production of Almeria

The high-yield agricultural model in Almería is based on eight diﬀerent crops grown under plastic greenhouses: tomato, sweet pepper, cucumber, courgette, aubergine, green bean, melon and watermelon. Having led fruit and vegetable exports in Spain for more than 50 years, a decrease in melon growing areas in Almería in the last years has caused a change in supply that is aﬀecting the model’s proﬁt. Papaya cultivation could reactivate the proﬁt of the agricultural model in Almería that is at a mature stage and also improve the available product range.

Scientists at the University of Almería (Spain) have showed the advantages of incorporating a subtropical crop like papaya and increasing the range of products offered by the Almería agricultural sector, which tends to concentrate the supply on only eight horticultural commodities. Papaya cultivation has been selected for several reasons: there is an important Northern European demand for this crop and papaya can be cultivated under greenhouses with the productive conditions of the Spanish southeast. 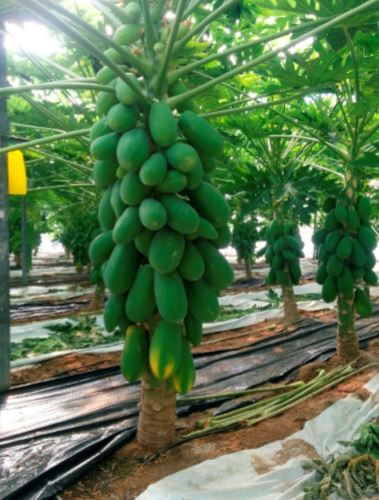 For these reasons, the scientists have assessed the quality of papaya cultivation grown under a naturally ventilated greenhouse and have estimated the net proﬁt before taxes that the papaya crop would generate, over a period of 2.5 years (30 months). A comparison is made with the most common horticultural crop combinations in South Eastern Spain, crops that have been grown in the province of Almería for four decades.

The papaya crop needs greenhouse infrastructures high enough to contain the growth and size of the plants during a cycle crop, which is possible in most of the greenhouses of the horticultural production model of Almería. The papaya harvests obtained in the region meet the quality requirements demanded by European markets. Furthermore, yields obtained are equal or higher than yields obtained by other producing countries. This crop improves proﬁt compared with the proﬁt obtained from the rotation of other horticultural crops that have been traditionally grown in the region.

Results have demonstrated that papaya cultivation under greenhouses in Almeria region is feasible, with higher yield obtained than in other ountries, with local mature commercial channels which have the how-know to sell exotic commodities complying with the European marketing standards. The cultivation of this fruit under greenhouses in Almería can be a rentable and commercial activity for farmers.