World production of fresh pears for 2019/20 is forecast up 13 percent to a record 23.1 million tons as gains in China more than offset weather-induced losses in the European Union. Higher output in China is expected to boost global trade. China’s production is projected to rebound from last years’ frost-damaged crop, surging over 20 percent to 17.0 million tons on favorable weather. Improved supplies are forecast to drive exports up almost 40 percent to 500,000 tons on higher shipments, especially to Indonesia and Vietnam. 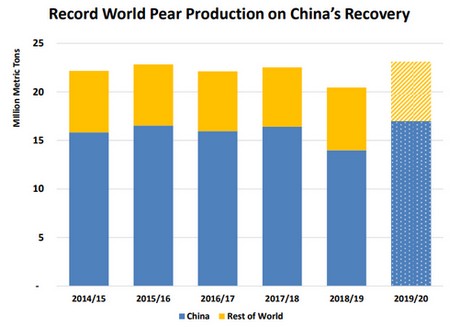 Imports, though small, are also forecast up, rising to 15,000 tons as successful EU marketing campaigns rouse interest in Western pear varieties. EU production is forecast down over 400,000 tons to 2.2 million as nearly all Member States experienced crop-damaging weather. Exports are expected to plummet nearly 30 percent to 220,000 tons on reduced output, while the lower supplies are expected to boost import demand by 12,000 tons to 180,000.

U.S. production is unchanged at 726,000 tons as higher yield in California on good weather conditions offsets losses in Washington resulting from fire blight disease, hail, and heavy rain. USDA’s National Agricultural Statistics Service surveyed industry and published a U.S. forecast for pear production in the August 2019 Crop Production report. Exports are expected up slightly to 150,000 tons on improved deliveries to top markets, including Mexico, Canada, and India. Higher shipments from China and South Korea are expected to help lift imports, forecast up 7,500 tons to 80,000.