Statistics Canada has estimated Canadian potato production in 2019 to be up 2.4% or 2,472,000 hundred weight above the 5-yr average in Canada. With demand growing for potato products, growers in the spring of 2019 planted an additional 3.7% or 13,000 acres to meet these expansion requirements. Unfortunately, poor harvest conditions, particularly in Western Canada, have resulted in 20,296 acres being abandoned in farmers fields. This is after, what was considered a precedent in 2018, when an early onset of winter resulted in 18,049 acres being left in the ground across the country from PEI to BC. The net increase in production, therefore, is much less than what industry actually desired. Canadian yields of 312 hundred weight per acre on the area that was harvested are above last year’s 310 cwt./acre and continue to surpass the 5-year average in Canada. Comments on individual provinces follow. 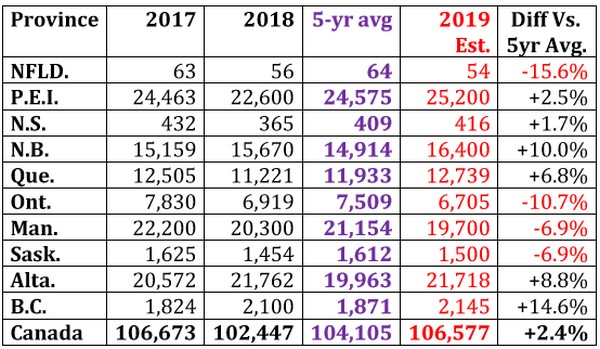 Prince Edward Island: The country’s largest potato growing province fared better than last year due to improved yields and a better fall for harvesting. There were higher yields in the western part of the province, however excess rain from Hurricane Dorian, also resulted in some unharvested acres in that area. Stats Canada estimates that PEI left 1,500 acres in the field, a substantial improvement over last year’s abandonment of 6,800 acres. Yields are estimated at 300 cwt./acre, above the 5-yr. average of 293 cwt./acre. Some of the earlier harvested varieties were lighter than the provincial average. Overall production is estimated at 25,200,000 hundred weight, an increase of 2.5% above the 5-yr. average.

Nova Scotia: Yields for one of the country’s smaller producers are estimated at 260 cwt./acre, which is below the 5-yr. average of 272 cwt./acre. Production on the 1,600 acres in NS is estimated to be 416,000 hundred weight.

New Brunswick: The 2019 potato crop appears to have been good in the country’s 4th largest producing province. NB growers planted an additional 1,000 acres in the spring to meet processing volume expansions, as the industry shifts to growing less table and seed potatoes in the province. Like most areas, planting was delayed in the spring, but the crop caught up throughout the season. Yields are estimated at 311 cwt./acre, above the 5-yr average of 305 cwt./acre. Quality is much improved over year ago results. Officials feel only 100 acres went unharvested this fall, in comparison to 2018 which saw 1,000 acres left out. Overall estimated production is estimated to be 16,400,000 hundred weight, up from last year and above the 5yr. average of 14,914,000 hundred weight, an increase of 10%.

Quebec: After a delayed planting season, the potato crop in Quebec experienced a hot and dry summer, however, growers feel their crop turned out very well with good yields, at 299 cwt./acre. After a slight increase of 2.4% in planted acres this spring, to meet industry expansions, the overall production is estimated at 12,739,000 hundred weight, an increase of 6.8% above the 5-yr. average. For the most part, the province escaped cool harvest temperatures, allowing most of the crop to be harvested (with the exception of 385 acres), in comparison to 2018 where 1,730 acres were left out during the winter.

Ontario: Ontario growers experienced a break in their planting schedule as rain delayed the finish, with planted acres very similar to one year ago. The hot summer temperatures challenged growth of potato plants, however crops did well for summer fresh growers and early processing fields. The bigger storage area in the province was very dry even with access to irrigation. Stats Canada estimates the yield at 200cwt./acre, below the 5-yr. average of 217 cwt./acre. Harvest was a tough one and industry officials estimate 500 acres were not harvested, which would be double of 2018. Overall production is estimated at 6,705,000 hundred weight, a decrease of 10.7% below the 5-yr. average of 7,509,000 hundred weight.

Manitoba: After coming out of a difficult harvest season in 2018, Manitoba growers were optimistic to be planting a new crop in 2019. Planted acreage increased by 9.2% or 5,900 acres to meet some of the needs of the new JR Simplot French fry factory scheduled to open in Portage LaPrairie in January 2020. The growing season was a hot, dry one, but growers were able to get enough water on the crop for good canopies. As the crop headed toward maturity, stands looked excellent with the potential to even surpass last year’s record yields. Unfortunately, the rains which could have been used earlier in the season, started coming in copious amounts just as harvest was beginning, waterlogging soils and bogging down equipment. As growers waited for heavier soils to dry out, they were hit by a major blizzard on October 10th. After another delay, growers went back after two weeks and dug what they could but had to give up on October 26 as the ground froze for winter. The resulting abandonment is estimated at 13,000 acres. The Canadian industry sympathizes with this extremely tough situation for Manitoba growers who also had to leave 5,300 acres in that province last year. Seed and table producers were able to harvest most of their crop with difficulty, but the processing sector is deeply affected, not only by field losses, but also with the challenges within storages to maintain this inventory. Manitoba’s overall production is estimated at 19,700,000 hundred weight, or 6.9% below the 5-yr. average of 21,154,000 hundred weight. Yields on the harvested acres are estimated at 346 cwt./acre, similar to last year but above the 5-yr. average of 336 cwt./acre.

Saskatchewan: After a hot, dry summer in Saskatchewan with very little rain since planting, the province received 1-3 inches all at once. The moisture provided good growing conditions for the potato crop and yield and quality for the predominately seed growing region appeared much better than in 2018. Yield is estimated at 250 cwt./acre. Saskatchewan producers were fortunate to miss all the weather-related harvested issues occurring in the provinces on either side of them and were able to harvest most of their crop. Overall production is estimated by Statistics Canada to be 1,500,000 hundred weight.

Alberta: In the spring of 2019, Alberta growers planted an additional 10% or 5,600 acres to meet expanding seed markets and also to accommodate the volume increases required by the new Cavendish Farms French Fry plant opening in August 2019 in Lethbridge. The growing season was hot and dry in the southern processing area of the province, in comparison to cool and wet in the northern seed growing area. The processing crop in the southern region was subject to a damaging hailstorm on August 6th affecting approximately 3,500 acres. With a good average crop potential, harvest also became a challenge for Alberta growers as an early season snowstorm moved through the Taber area on September 28th with 30% of the crop still to be harvested. After almost 3 weeks with no harvesting and dipping temperatures, growers went back and dug another 3,000 acres before winter settled in on October 18th. As a result, 4,385 acres were left out, comprising 3,200 acres destined for processing and 1,185 for table and seed. Fortunately, most of the seed grown in the northern region got harvested before cool weather set in. Stats Canada estimates Alberta yields at 382 cwt./acre, below the 5-yr. average of 388 cwt./acre, and last year’s record breaking 408 cwt./acre. Overall production is estimated at 21,718,000 hundredweight, or 8.8% above the 5-yr average.

British Columbia: Although the spring started off a bit cool the season turned out to be an excellent one for growing potatoes in BC. Strong stands provided yields of 325 cwt./acre which is above the 5yr. average of 292 cwt./acre. Although there was above average rainfall in September most growers had their crop out by the second week of September leaving only about 100 acres not harvested. Statistics Canada estimates overall potato production in British Columbia at 2,145,000 hundredweight, up 14.6% from the 5-yr. average of 1,871,000 hundredweight.