Initial shopper response to this year’s crop of SweeTango® brand apples is overwhelmingly positive, according to new data from the apple’s growers. Fueled by a multifaceted marketing campaign to excite consumers about this year’s crop and push them to retail, new data from recent in-store demos show that this crop of SweeTangos is scoring high marks with shoppers on several key purchase drivers including taste, quality, convenience and value. 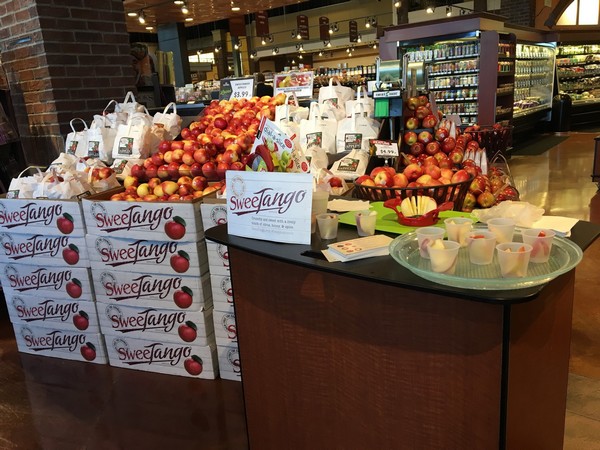 To kick the new SweeTango season off across the United States and Canada, the grower-owned Next Big Thing, A Growers’ Cooperative has focused on both direct-to-consumer communications and in-store visibility, reports Executive Director Jennifer Parkhill. That consumer campaign includes advertising to reach SweeTango’s target foodie demographic across a range of channels, including podcasts and YouTube. The brand is active across social media channels, which builds and maintains consumer awareness and knowledge of SweeTango.  And at retail, the cooperative’s regional sales desks from coast to coast are working with their various retail customers to meet their regional and local needs, including in-store demos.

At store level, SweeTango is receiving rave consumer reviews. A whopping 98 percent of shoppers who tried SweeTango apples during recent in-store demos reported that they “loved the flavor.” Shoppers gave SweeTango high marks for its quality, with 93 percent calling the apple a “healthy choice.” They also overwhelmingly rated SweeTango a “great value,” at 82 percent.

“Customer reaction to our sampling events underscores the importance of demos at store level to set the pace for the season,” said John Cushing of New York Apple Sales. NYAS, which supports SweeTango Eastern region sales lead Fowler Farms, commissioned the SweeTango demos at more than 80 locations with a large national seller in late October.

This is the first season that there will be SweeTango volume into the New Year, which extends the opportunity for retailers to tap into SweeTango’s established popularity, notes Scott Swindeman with Midwest region SweeTango sales lead Applewood Fresh Growers.

“We’ve got a quality crop this year, this is the nicest colored and conditioned crop we’ve had in the Midwest since the SweeTango program began. For the first time we’ll have fruit into January, so this is a great time for retailers to build on and extend SweeTango’s fan base,” said Swindeman. He also noted, “We are having tremendous success with our pouch bags and tote bags, they are a great consumer value.”

“We have great consumer brand recognition now, and retailers all know the apple. It’s been an easy conversation to get them back on the shelves this year,” said Pepperl.