Wisconsin hardest hit up until now

More than 100 people have now been confirmed with infections in an E. coli outbreak associated with romaine lettuce. Public health officials continue their warning against romaine lettuce grown in the Salinas, CA, area or any romaine from an unknown source.

As of today, there are 102 patients spread across 23 states, from coast to coast. The outbreak has an unusually high hospitalization rate with more than half of the patients have required hospitalization, says an update from the Centers for Disease Control and Prevention.

At least 10 people have developed hemolytic uremic syndrome (HUS), a type of kidney failure that is frequently fatal and also causes lifelong complications such as brain damage. The confirmed patients range in age from 1 to 89 years old. 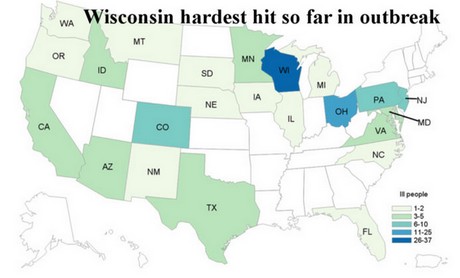 As the harvest of romaine begins moving from the Salinas area in California to the Yuma area in Arizona, federal officials continue their warnings. There have been five outbreaks related to romaine from California and Arizona since late 2017..

“Epidemiologic, laboratory and traceback evidence indicates that romaine lettuce from the Salinas, CA, growing region is a likely source of this outbreak,” according to an update today from the Food and Drug Administration.