Troubles ahead for Egypt as Ethiopia pushes Blue Nile dam

Egypt has for years been suffering from a severe water crisis that is largely blamed on population growth, and farmers try to make the most of the short supply. But other factors include climate change drying up the Nile, and water pollution due to sewage discharge as well as industrial and municipal waste.

Mounting anxiety has gripped the already-strained farmers as the completion of Ethiopia’s gigantic dam on the Blue Nile, a key tributary of the Nile draws nearer. 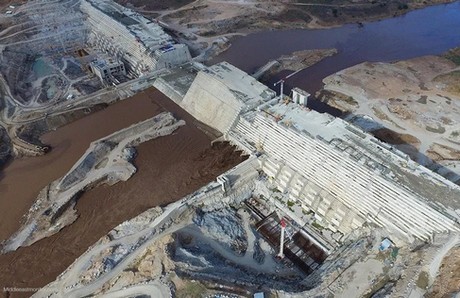 Egypt views the hydro-electric barrage as an existential threat that could severely reduce its water supply. But Ethiopia insists Egypt’s water share will not be affected.

“It will be a devastation to all of us and our farmlands. How will we be able to sustain our businesses then? If we cannot support ourselves, how will the rest of the country find food?” said Ahmed, a 23-year-old farmer.

On Monday and Tuesday, Egypt was hosting two-day talks with Sudan and Ethiopia on the giant project with a January deadline for an accord looming.

“A deal has to be reached. Otherwise, Egypt will be prone to insurmountable social and economic risk,” said Hani Raslan, an analyst at Al-Ahram Center for Political and Strategic Studies in Cairo. Parched land, a fall in food production and an inability to generate electricity from Aswan’s High Dam are a few risks, he said. “And this could eventually translate to political crisis and instability.”

Hydrologists note that people are facing water scarcity when the supply drops below 1,000 cubic meters per person annually. Egyptian officials say in 2018 the individual share reached 570 cubic meters and is expected to further drop to 500 cubic meters by 2025.