A North Queensland banana grower has improved his productivity and saved time, since the introduction of an under-tree slasher at his farm.

Matt Abbott, from Rabbits Organics, explained to fellow growers that mowing the grass was a pretty big job for his staff, so they applied for a grant to attach an automatic slasher.

"So, we can now mow the row, in one pass, and go right to the edge of the trees," Mr Abbott said. "It's got hydraulic sensors on an arm, and when it touches the tree it moves back in. It is a slasher that pivots in the centre, and on each side, there is an arm and a 900mm disk. It just moves in and out depending on how close the trees are." 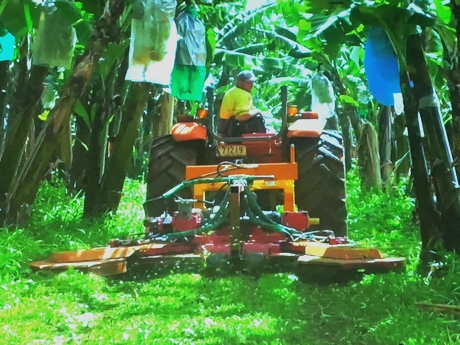 Mr Abbott, and his brother Ben, have been trialling the pivoting-head slasher machinery for use on their Wangan farm since 2017, after securing a grant from the Reef Trust III program.

"We have a slasher that we started with originally, and then we started looking at an attachment that would go close to the trees and move around them," Mr Abbott said. "The first one that we tried was fully hydraulic, but it worked on pressure; it moved okay but didn't work exactly how we thought it was going to work. So that's when we developed the one that we have got now."

He added that these slashers were traditionally used on vineyards, and crops that were not as heavy duty as banana plantations. Therefore, he had to make adjustments to strengthen the machinery through trial and error.

"One of the changes was that we put a big gearbox on it, and it is working quite well now," Mr Abbott said. "It has gone from making two passes per row, to just one. I first looked at it around 2-3 years ago, because it was a lot more expensive than I thought. So, we tried the hydraulic one, but as (the task) was taking more and more time, I came back to this. So, it took a few years to implement, but it has definitely been worth the investment." 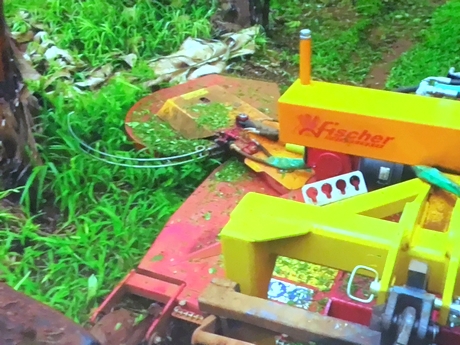 Maintaining full ground cover is an important goal, as high-quality ground cover is crucial in reducing both nutrient and sediment loss from their farms; slashing is the primary control method, given the Abbott Family are organic farmers.

"We started organic growing because we were a small farm, and profitability on a small farm is hard," Mr Abbott said. "That was the main reason we changed, but after that, it became about having better practices. The hardest thing to change is the mindset. Traditionally, I would have looked at our farm and seen the weeds, and thought that was untidy and bad. Now, I see all the benefits of having these methods."