The pear range was based on Italian offers, mainly Abate Fetel, Santa Maria and Williams Christ. Red Williams Christ and Boscs bottle pears had a complementary character. The Netherlands primarily participated in the business with Gute Luise and, after that, with Conference and Gellert. German Alexander Lucas, Conference and Gute Luise completed the marketing. Domestic delicacies from Charneux could be handled quickly in Berlin at €1.00 to 1.20 per kg.

Turkish Santa Maria arrived only locally; Devici of the same country had quite large sizes in Frankfurt. There the Belgian Conference, which was too abundant, was noticeably cheaper. Pears lost importance overall, as citrus fruits increasingly moved to the centre of attention. The quality was still convincing.

Nevertheless, at some places the trade was only nice towards the weekend. Hamburg and Cologne reported a supply adapted to the accommodation possibilities, so that the quotations remained at the previous level. At individual locations, there were also increases in prices which were based on slightly limited availability. 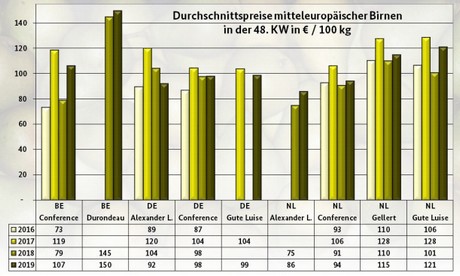 Apples
German Elstar, Boskoop and Jonagold dominated continuously. The demand could be satisfied without any problems; it improved from time to time during the pre-Christmas period. Prices did not change significantly.

Table grapes
In general, the demand could be met without difficulty. The quality of the European batches was not the same everywhere. Accordingly, there was a broad price range at times.

Oranges
Spanish Navelina dominated over Greek products. Even though the season just started, the trade was quite satisfying.

Small citrus fruits
Spanish clementines, mainly clementines, shaped the scenery. In general, the accommodation facilities improved. This was based on the Advent season and the worsening weather.

Lemons
The availability of Spanish Primofiori and Turkish Enterdonato was limited. Nevertheless, demand could often be satisfied without effort.

Bananas
Sales were usually somewhat quiet. When the supply was sufficient to match the rather tepid demand, prices remained unchanged.

Lettuce
The majority of lettuce came from Belgium. The quality rarely left anything to be desired. The demand could be met. Somehow ignoring the increased supply, prices tended to rise a little.

Cucumbers
The cucumber market  was dominated by Spanish batches. Here and there Greek, Dutch and Belgian articles complemented the range. The unpopular wrapped goods did not generate much interest.

Tomatoes
An extensive assortment was still available. Panicle tomatoes mainly came from Spain, the Netherlands and Belgium, round tomatoes from Spain and Morocco.

Sweet peppers
Spain was number one here, with Turkey adding goods. Availability increased, so that demand could be met without any problems. Marketing did not see any particular highlights.