Pampa Store supplies yellow lemons from both Mexico and Argentina. The export season for the Mexican product to the U.S. is coming to an end soon, running from April through December, and the season has been a good one for Pampa Store, according to Hugo Flores, in terms of quality and fruit reception. “We shipped approximately 300 truckloads distributed mostly along the U.S. coasts and also in Canada. Although our main focus is on organic lemons, we also supply conventional lemons.” 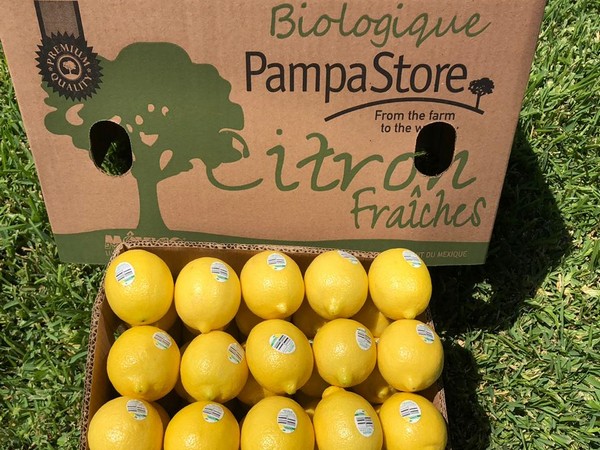 Good demand in North America
Currently Pampa Store’s main market for Mexican lemons is North America. Flores explains: “The lemons from Mexico are mainly shipped to the U.S., even though there is demand from other markets – specifically from Europe, something that together with our growers Pampa Store has been exploring for several years now and with positive results.

Although it is more difficult to supply the European market in view of stricter organic standards, long voyage to destination and correspondingly more extended financial cycle as well as a higher risk of damages to the fruit while in transit, we definitely see certain advantages to count on Europe as an alternative outlet for our fruit. Through the seasons and with an increased lemon production in Mexico, the US market is becoming highly competitive especially with the start of local production in the US and more so on medium and small size fruit both Fancy and Choice grade as this is where California production normally peaks.  This is the window in which it becomes of great relief to redirect some of this smaller fruit volume to Europe and still be able to obtain a decent average return on it. The reason why we and our growers have been working on attending the needs for lemons, both conventional and organic, of the European market in the window of August to September.

The organic lemon market, like most organic markets, remains to be a niche in the U.S. “Mexico is one of the major suppliers of lemons to the U.S. market and almost all of the lemons coming out of Mexico are conventional. Still, the demand for the organic variety has been steady and we had a good season for our organics this year. The demand is high enough to absorb all of our product, still we see the need to open up alternative markets for our production globally.” Flores adds.

Argentinian crop late this year
The company also exports lemons from Argentina. “The season generally goes from March to August, still this time frame varies every year depending on the weather. This season, for example, exports only ran from June through August. The heavy rains early in the season have impacted the crop, its quality and internal conditions.”

He continues: “As a consequence of same, the fruit would have a shorter shelf life and serious condition defects making it hard to sell the affected fruit. Once at final destination lemons had to be moved very quickly and most of the time at reduced prices. In view of the above mentioned it has been a challenging season for lemons from Argentina.” Flores concludes.