The kiwi harvest in Turkey has ended two weeks ago and the total harvest is less than average. Thanks to new packaging and sorting machines they purchased from Italy, the country now feels they can be a worthy competitor to both Italy and Greece.

Kiwi hasn’t always been one of the fruits produced in Turkey. At first, Tumen Tarim would import kiwis from Chile, Greece, Italy, Iran and New Zealand. “We have supplied Turkey with kiwis for more than 30 years. Back when we imported the fruit, the market was relatively small. Nowadays the kiwi market is a lot bigger and Turkish farmers decided to start producing kiwi themselves. Year after year, production increased and the total capacity of kiwi production is at 55,000 tons today. Thanks to new farms that number is only going to increase.” Kerem Baltu, export manager of Tumen Tarim explained. 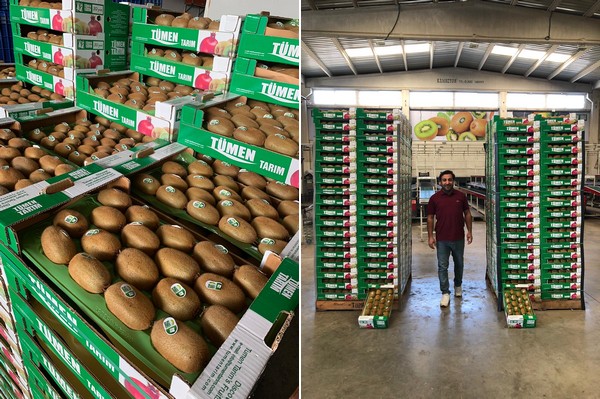 On the 20th of November, the harvest of kiwis concluded for the Turkish farmers. “This year the total production is looking to be around 40,000 tons. This is about 25 per cent less than our total production capacity and sizes are also much smaller than they were in previous seasons. However, if we compare the Turkish Hayward variety with those of other countries, the taste is really nice and sugar levels are around 13 to 14 brix.” Kerem said.

The Turks feel they can be a worthy competitor to the Italians and the Greek, thanks to newly purchased packing and sorting machines. “Tumen Tarim have bought these machines from Italy to ensure a competitive product. As Italy and Greece are our main competitors, it was important to get on their level. A lot of countries and consumers do not know about the Turkish kiwi at all. However, we’re confident that when the market does discover the Turkish kiwi, our product will be appreciated. It will be a while before export volumes will increase, as currently the local demand exceeds the supply. On top of that the prices are high this season due to lesser available volumes and smaller sizes. Luckily our company does have enough volume and correct sizes available for our customers.” Kerem concludes.