In marketing year (MY) 2018/19, Bulgarian apple and pear production increased by 12 and 18 percent, respectively, due to favorable weather, higher yields, and an increased area harvested. In contrast, table grape production declined by 10 percent, due to a lower acreage harvested.

Assuming favorable weather conditions, prospects for MY2019/20, production is expected to increase. Apple imports increased in MY2017/18 and total consumption exceeded 100,000 tons for the first time. Expectations are for pear and table grape imports in MY2019/20 to rebound and respond to higher consumer demand. 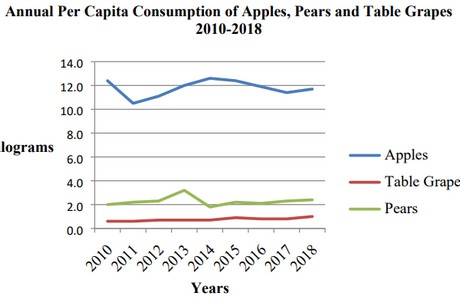 Since 2013, apple imports have increased along with growing consumer demand. In 2018/19, lower international prices drove imports to 64,600 tons, more than double the previous year. The average import price in MY2018/19 was at $164 per ton, 55 percent lower than in the previous MY. North Macedonia, Poland, and Greece were Bulgaria’s primary apple suppliers. North Macedonia accounted for 58 percent of imports, a four-fold increase over the previous year. Imports of apples for processing were at 4,900 tons vs 4,200 tons in the previous year, however, the processing industry used also a lot of other imported fresh apples for its needs (estimated at 13,700 tons).