The window for Indian pomegranates will be smaller than usual, in part due to the heavy rains India has had to deal with during the monsoon season. Luckily the season is still looking positive and one Indian exporter has been able to start working on sustainable packaging for their pomegranates.

For Indian exporter Monsoon Green Earth Farms, the expectations for the season are high. Unfortunately, the season has been delayed by three weeks. According to Girish Sarda, the Director of Sales Operations for MGE Farms, the window for Indian pomegranates has been reduced. “Normally we would’ve started exporting the pomegranates in the first week of November, this year the export is about to start this week. The real window sales is now from week 1 to week 8 in 2020. It’s expected that Peru will start with their season around mid-February, so we’ll only have eight weeks to export whatever we can.” 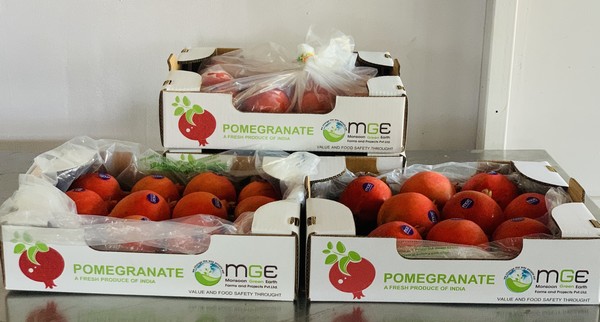 MGE Farms ships their pomegranates to countries like Europe, Canada, Asia, Russia and this week will mark the first shipment to Europe. According to Sarda, these shipments are meant to fill the demand during the holiday season: “The most important markets will be the Southern countries in Europe, but also the Scandinavian countries. There’s no real need to go further in terms of distance, as the volumes will be low and are not included in any programs. The programs we have with several retailers will start in the first week of January.”

The rain in the past few months was the main reason for the delay of the Indian pomegranates, as the fruit setting of the fruit took a bit longer. “The delay in fruit setting caused there to be less fruits per plant. However this can also be used to our an advantage, as there’s a chance we can increase the average size of the fruits. However, with the entire being delayed there’s also a good chance some farmers will not be ready in time for the start of the season,” Sarda explains. “This can have a big impact on these farmers, as prices for pomegranates were high during October and November. Partly due to it being the festival season in India, partly due to high demand from neighboring countries. We see prices are going down, although they’re still slightly higher than they were during this time of year last season.”

This year, Monsoon Green Earth Farms is introducing a new kind of packaging for their pomegranates. “We have modified our packaging to 100% bio-degradable bag (MAP bag) that contains no plastic at all. Our next target is to use paper tray instead of plastic tray inside the box; hope the same will start this season onward. The cost of this packaging is a bit higher, but it’s important for everyone that the packaging is sustainable. It’s the demand of both end consumers as well as the retailers. It fits our mission to do what we can for the planet, as we’re also the only Rainforest Alliance certified company in India.” Sarda concludes.