'Native apples of the Elstar, Jonagold and Boskoop varieties dominated'

There was an abundant supply of apples, dominated by local products. The basis was formed by Elstar, Jonagold and Boskoop. France participated mostly with club varieties, such as Pink Lady and Honeycrunch. In Berlin, elaborately prepared Belchard varieties cost €3.30 per kg. From Italy came mainly Royal Gala and Granny Smith. In the run-up to Christmas, Red Delicious came increasingly into the customers' focus. Polish Gloster and Jonaprinz complemented the events in some places. Dutch Boskoop and Elstar played only a minor role. Overall, the supply situation was not subject to any significant changes.

Demand was met without difficulty. The accommodation options in Cologne improved after a rainy Monday. If the quality was convincing, the traders generally confirmed their previous prices. Locally they lowered their prices in order to increase the sales. In Berlin, domestic Topaz and Wellant became more expensive due to a shortage in availability. 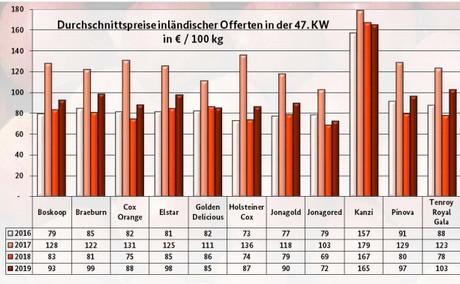 Pears
Italy ruled the market with its Abate Fetel and Santa Maria. Williams Christ lost in importance, Red Bartlett gained some of it. The demand could be satisfied without any problems.

Table grapes
There was movement within the range, as European products withdrew a bit from the scene, while imports from overseas increased.

Oranges
Spain dominated events with its Navelina and complemented the scene with the Navel. In general, the sales were going quite friendly, triggered among other things by the autumn weather. The larger the calibers of the citrus, the better the handling.

Small citrus fruits
Spanish clementines with their immense presence dominated the markets overall. The low temperatures boosted the outflow of goods: demand certainly intensified. However, as availability had increased massively, in principle the distributors did not really benefit from this.

Lemons
Spanish Primofiori dominated here, ahead of Turkish Enterdonato. The supply was sufficient to satisfy the constant interest. With regard to the prices, no significant changes were discernible.

Bananas
Deliveries from the ripening plants came in a metered manner. As a result, the availability on-site was mostly in harmony with the accommodation possibilities.

Cauliflower
The Italian batches certainly became more abundant. The cooler weather improved the sales. The demand was generally satisfied, but prices were still on the rise.

Lettuce
With regard to iceberg lettuce, the presence of Dutch deliveries was limited and Spanish deliveries dominated. Accommodation was steady and demand was met without difficulty. As a result, prices did not change significantly.

Cucumbers
Among the cucumbers, goods from Spain prevailed. The interest was satisfied almost everywhere. The Spanish wrapped products turned into real shelf queens at times.

Tomatoes
An extensive and varied range of products was available, the foundations of which were laid by various countries. All in all, prices often crumbled. This was due on the one hand to extensive deliveries and on the other hand to slightly too weak demand.

Sweet peppers
Spain prevailed, Turkey added. The demand could be satisfied without any problems. Prices drifted apart locally, which was due to the inconsistent quality and size of the offers.