Spain is by far the largest exporter in the world

Spain is the world's leading exporter of peaches. Italy and Chile followed in 2018 as the world's next most important exporters. The global export market amounted to around 1.9 billion euros. This is shown by statistics from the International Trade Centre (ITC).

Hidden player China
Although China is only the sixth largest exporter of peaches, China harvests and consumes by far the largest quantity of peaches in the world. China accounts for 66.5% (13.5 million tonnes in 2018) of the world's harvest. The peach originally comes from northern China, where peach trees are still grown in enormous quantities today. 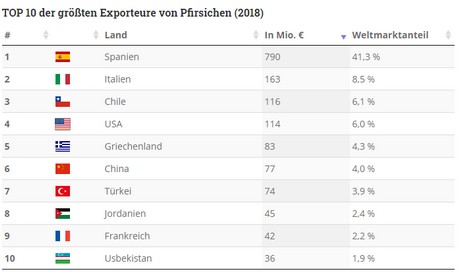 The largest importing countries
In 2018, Germany imported the largest volume of peaches in terms of value. Goods with a value of more than 338 million euros came into Germany.