Richard Hochfeld imports grape from many origins around the world, at the moment there is fruit from Italy and Greece on the UK market. Namibian fruit will arrive next week and South Africans have started packing in the Northern Cape and North Eastern Transvaal with every indication of a good season.

“We still have some of the late Northern Hemisphere grapes, mainly from Italy and some from northern Greece, the Spanish did a series of promotions in summer and autumn, so it ended quickly. We have had a nice season of Brazilian fruit too with good arrivals of both white and black seedless with good quality, there is more red fruit coming from Brazil than has been seen in previous years, but this later part of the Brazilian season has had some colouring issues.

Peru, a rapidly expanding industry with focus on other markets has been quite an inconsistent source for the UK and Brazil has stepped in and filled that gap. Last year for example when it was thought that the US would have an over supply, Peru sent a lot of grapes to Europe, this year, the US is looking at a short supply from California and Peru is sending most of its grapes there.

Richard Hochfeld mainly does programs for a large retailer so Karen didn’t want to comment on market prices, but did say that there is no oversupply but there is certainly more competition from other products in the fresh produce aisles. 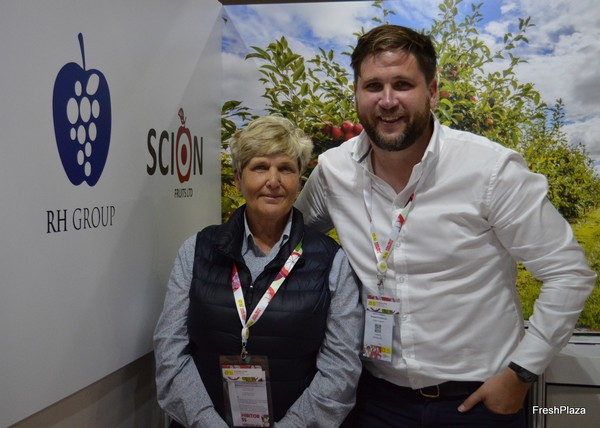 There are so many great new varieties around which is great for growers as they are higher yielding and travel better, but do consumers know the difference and does it even matter if they don’t?

“The consumer knows a few varieties such as Sable seedless and Cotton Candy for example, but generally it is white, red or black. I think we need to do more work on this. The way forward is in sequencing – a good 12 week supply of similar tasting grapes, more like a consistent group  rather than individual varieties, but we are not in that position yet, especially with the larger retailers where they have lots of different tasting varieties. In time as volumes evolve I’m sure there will be a push on getting consumers more engaged.”

Consumers prefer mixed packs, according to Karen it seems they like to hedge their bets. “Maybe you have a 50-50 split in a household between people who want red and people who want white, or it satisfies a different occasion.”

Very few retailers stock seeded grapes these days they usually end up in ethnic markets but can be found in one discounter.