Insect experts from the Stellenbosch University Department of Conservation Ecology and Entomology are part of a large-scale research project involving experts from 15 countries. It aims to develop the science and technology needed to better detect, prevent and manage Europe’s growing fruit fly problem. The project is made all the more urgent in light of climate change.

The SU research groups of Prof John Terblanche, an expert in insect physiology, and Prof Pia Addison, an expert on matters related to pest management, are involved in the OFF-Season FF-IMP project. The project’s acronym stands for the “In-silico boosted, pest prevention and off-season focused integrated pest management against new and emerging fruit flies”.

The OFF-Season FF-IPM project focuses on three specific species of true fruit flies (flies in the family Tephritidae). The eastern fruit fly (Bactrocera dorsalis) and the peach fruit fly (Bactrocera zonata) are known invasive species and are considered as imminent threats to the production and marketing of fruit in Europe. The Mediterranean fruit fly (Ceratitis capitata) has recently become an emerging problem even in temperate fruit production areas on the continent. 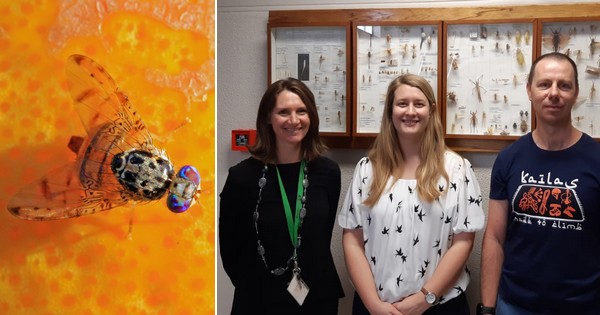 The FF-IPM is an effort to effectively and timeously implement measures to prevent major invasions by these species of fruit flies. It aims to eradicate established species by focusing on specific out-of-season periods which are crucial to the insects’ development cycle. Innovative tools are being developed to prevent infected fruit from being transported or sold. This, for example, includes the development of a sensory device that picks up on the odour released by larvae inside a fruit. Methods will also be devised to locate emerging populations as early as possible using automated, real-time trapping methods. Population dynamic computer and software programmes will be used to ensure effective biological control and rapid response strategies.

“The completion of many of these tasks requires adequate information about the species’ physiology, distribution and ability to withstand different environmental stresses. Our Stellenbosch University team will play an important role by gathering such data for existing populations found in southern Africa,” explains Prof John Terblanche of the SU Department of Conservation Ecology and Entomology. “The data the project will collect, thanks to the generous EU funding received, will be put to use initially by our European colleagues, but is also available to our own local fruit and vegetable sector to better manage these local species.”

He says that several students and postdoctoral researchers will also receive critical training in key skills surrounding these species and their pest management in agriculture thanks to collaborative workshops.

The FF-IPM project is funded by the European Union under its Horizon 2020 Research and Innovation Action programme and coordinated by the Entomology and Agricultural Zoology Laboratory of the University of Thessaly in Greece. The project consortium consists of 21 research organizations and other role players from ten European countries, as well as Israel, South Africa, China, Australia and the USA.

The South African entities involved include researchers from Stellenbosch University’s Department of Conservation Ecology and Entomology and Citrus Research International (CRI) in Nelspruit. Pilot tests will be carried out in 8 different countries, including South Africa.

Among the experiments to be run by the SU research teams include ones on the minimum and maximum environmental stresses (such as heat or food restriction) that particular species of fruit fly can endure. Their ability to disperse over great distances will also be tracked. Genetic profiling methods are to be developed so that typically hard-to-identify species or life-stages found in an area can be identified easily and definitively.