“As we’re growing, so does the market for ginger” 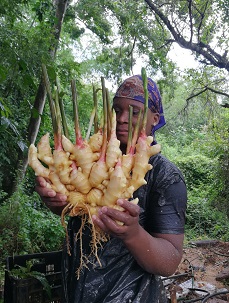 Few areas in South Africa suit ginger, but the Sabie Valley outside Hazyview, next door to the Kruger National Park, is an automatic choice to cultivate ginger, says Jaco Lubbe of Sabie Valley Ginger.

At the confluence of the Sabie, Sabane and Mac-Mac rivers the three Lubbe brothers have been growing what one Johannesburg fresh market agent calls “the best ginger grown locally” for the past five years.

There is a lot of irradiated ginger from China and Taiwan, sold at much lower prices than domestically-grown ginger and of often-times inferior quality, but Sabie Valley’s ginger is the preferred choice for many buyers and they easily compete, Jaco says.

Aroma of homegrown ginger stronger than of imported ginger
“Quality will always pull you through,” he notes. “The aroma of our ginger is stronger than the imported ginger and of course, it’s much fresher. Part of our success is getting our ginger to the consumer in as short a period as possible, within a day or two of harvesting. Imported ginger is at least a month old by the time it’s come through the irradiation and customs process."

Young ginger for processing can be harvested in April. Mature ginger is harvested from June, when its skin is stronger and shelf life is longer. Unharvested ginger can be left in well-watered soil for six months until the next replanting. 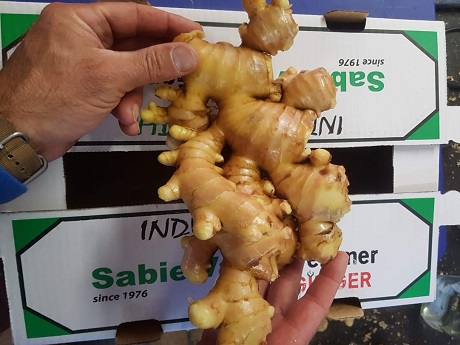 "We send to every single fresh produce market in the country, even the small ones,” Jaco says. “We supply some supermarkets but our target is the municipal markets. There’s a definite increase in demand because the health benefits of ginger are innumerable and that aspect is very important for us. We use it ourselves all the time. My dad grew ginger decades ago, he has a love for the plant, and we tap into his knowledge of ginger.”

Year-round ginger supply
They have seen a definite increase in demand for ginger and he foresees that it’s only going to continue. At the moment they’re producing at least 400 tonnes per season.

He notes that many farmers have tried their hand at ginger as a cash crop but soon give up upon discovering how much work lies in its cultivation, and that is why there has never been a local industry of the scale to sustain demand, hence the space for imports.

Their aim is to supply ginger year-round to the market and ideally, they’d eventually want to market it under their own brand name (currently ginger is mostly repacked into generic packaging with no information regarding origin).

They supply the ginger for Rugani’s ginger and carrot juice line. 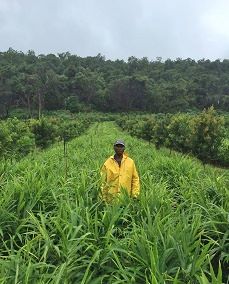 They are doubling their turmeric planting this year and while they’ve always had Galangal ginger growing on the farm (pictured right), they are starting this year with commercial production.

Every year from August to October they plant 10 to 15 hectares of virgin and humus-rich soil with ginger.

Two metres overhead micro sprinklers create a tropical atmosphere. No wonder then that both above and below the soil a plethora of pests await and therefore pest control during the growing season is particularly intensive and the farm follows a strict biosecurity regime.

Harvesting is done by fork, two workers to a clump, caked in mud. It is cleaned with a high-pressure hose, brushed and extraneous or unsightly parts cut off, in all totalling about six minutes of preparation on every clump of ginger.

After drying the separated fingers are packed into 5kg and 10kg boxes, like fitting together puzzle pieces in every box. Harvested ginger is kept at 10 to 12°C during transport.

The ginger stems and fragrant flowers (which alas don’t have the shelf life for a floristry career) are used as mulch in their 50ha of macadamias. They have been growing coffee for four years and aim to launch their own coffee bean brand at the end of the year.