Clementines predominated among the smaller citrus fruits. They came predominantly from Spain. Italian shipments merely had a complementary character. The season of Spanish Satsumas was nearing completion: the products came primarily from Turkey, Spanish batches rounded off the range of goods so only from. As a rule, Turkish imports kept going thanks to their low prices. Mandarins from Spain pushed their South African competitors completely out of the market and -apart from a few Turkish deliveries- had somewhat of a monopoly.

Availability generally grew. Due to the cooler weather, demand was increasing in parallel. However, it could still easily be satisfied. Quality of the goods was mostly convincing. Based on these facts, the prices often remained at their previous level. In Frankfurt, a wide price range of €3.25 to 4.50 per small box -2.3 kg- was established for Spanish Oronules clementines  In Berlin, citrus with and without leaves went for between €1.60 and 3.00 per kg. 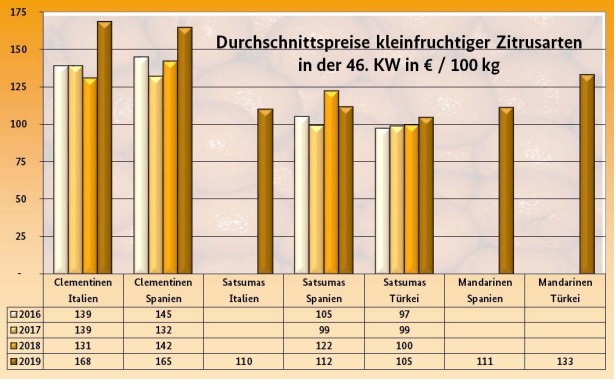 Apples
The offer did not change significantly. The influx and interest were sufficiently harmonized. The marketers were mostly able to hold on to their weekly prices. Only very rarely did the prices drop due to too low demand.

Pears
In general, business was rather quiet. Locally, prices could go up slightly due to limited inflows. From time to time, sales of some varieties improved, but this did not fundamentally affect their prices.

Table grapes
With the increased arrival of imports from overseas, things began to move. The demand could always be satisfied. Customers like to start buying before the weekend, in particular. Prices were higher sometimes, due to less European inflow.

Oranges
The lower temperatures improved the demand. Nevertheless, lower prices due to the massive supply could not always be avoided. South African fruits suffered increasingly from organoleptic deficiencies, which is why their prices dropped.

Lemons
Spanish Primofiori prevailed. Turkish Enterdonato gained in importance. South Africa and Cyprus completed the ranges. Although Turkish batches were present in all markets, they were real a competitor to the Spanish imports in Berlin and Munich only.

Bananas
The flow of goods from the ripeners was not particularly pressing. This meant that the quantities provided usually correlated with the demand. The traders were therefore able to fix their prices at a constant level.

Cauliflower
The presence of the dominant domestic batches had been limited, while that of the complementary Italian, Belgian and French counterparts widened. The demand could be satisfied without difficulty.

Lettuce
The Central European campaign ended for ice berg lettuce, as deliveries from the Netherlands and the domestic market narrowed noticeably. Spain shaped the events.

Cucumbers
The market was sufficiently supplied with cucumbers; demand was mostly quiet. Efforts to actively increase access through lowering the prices were often ineffective. The prices of mini cucumbers have generally remained at a constant level.

Tomatoes
Buyers were generally quite satisfied with the organoleptic properties of the products. Since the supply and the demand often correlated, prices stayed within their previous ranges.

Sweet peppers
Prices generally remained relatively rigid. In addition to this, some of the prices saw a perceptible and permanent upturn on Monday. In some cases, they rose gradually during the week and then sharply on Friday.