“To meet demand, we’re going to have to source apples from Italy and Greece”

The 2018-2019 apple season in Ukraine was a great season for USPA Fruit, a season where they could establish themselves in the market. “The harvest of 2018 was almost 30% higher than the harvest of 2017, which means we were forced to open new markets and sales channels for Ukrainian apples. I believe that our team did an excellent job, as the geography of shipments expanded to fifteen various countries, and sales channels were added by direct contracts with retail chains and catering companies,” said Volodymyr Gurzhiy, CCO of USPA Fruit LLC. “This means our apples were supplied to different chains of supermarkets, HoReCa, catering companies, airlines and even to military bases and vessels. This allowed a record increase in sales of Ukrainian apples far beyond Ukraine. In fact, we all worked on the quality of apples, packaging, logistics and service at all stages from production to the shelf.” 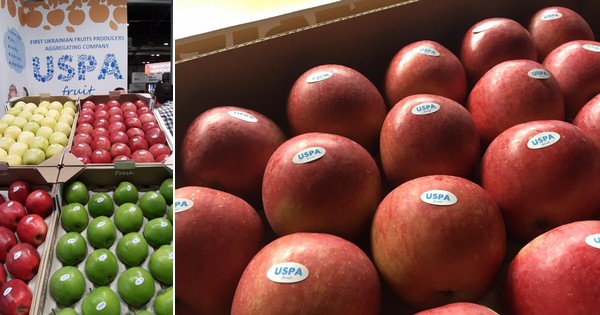 One of the challenges for cultivating apples in Ukraine was changing the mindset of the farmers. Up until this moment they had mostly been focusing on the domestic market, where Gurzhiy had plans to enter the world of exports: “We had to work hard with Ukrainian farmers to change their mindset and behavior to switch from supplying the usual markets to meeting the requirements for our new markets. For reach that level, together with international funds, we held a few seminars in the main horticultural regions to share with the relevant information.”

Even though volumes are down, for Ukrainian apples the demand is high. To solve this issue, USPA will source apples from other producing countries. "We have managed to build a commercial structure which allow us to sell more product than we have. If we take the previous season, I would say we could sell three times more than were shipped,” Gurzhiy explains. “Thus, in order to meet the growing demand for our apples, we'll need to source the apples from other countries like Italy, Greece and Serbia, as Ukrainian production is limited in some varieties. We expect to double our sales this season. We think it’s very important that our growth should not influence the quality, as this has always been our top priority.”

Demand for the Ukrainian apples is highest in countries that are in Gulf Cooperation Council. However, there are multiple popular destinations, says Gurzhiy. “The main European countries we work with are Sweden, England, Spain and the Netherlands. In Asia we export to Hongkong, Singapore and the most successful in season 2018-2019 was Malaysia, where we got the best results. For Malaysia, Ukraine was in the top three of suppliers of European apples just after Italy and France. However, the fastest growing demand is from GCC countries, like UAE, KSA, Kuwait, Bahrain and Oman.”

As a goal for USPA Fruit, the company hopes to grow and keep on par with the quality that the Italians offer. “This season we'll do our best to satisfy the growing demand on Ukrainian apples, especially on the apples under USPA fruit brand name. Our benchmark is Italy, so that we'll be targeted to keep our high standards to match the same standards as product from Italy, offering a more reasonable pricing policy. During the summer months, we'll be supplying sweet cherries, blueberries and some other crops.” Gurzhiy concludes.