The U.S. gets ready to begin importing table grapes in December

The Californian table grape season is coming to an end and the market is getting ready to transition to the imported product from the Southern Hemisphere. The overall volumes for the domestic table grapes are down this year, says John Pandol of Pandol.

“The 2019-20 California season will ship 5 to 10% less cartons than the huge 2018-19 season. We are already seeing fewer and fewer harvest crews in the fields every day, but this is not unusual for this time of year. The last box will likely be picked either during the first days of December or before the first hard freeze, whichever comes first.” 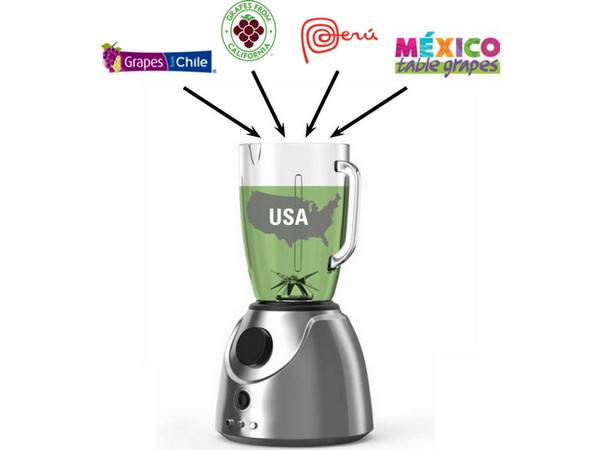 Pandol notes that while the Grape Storage Report shows that the numbers are much lower than they were last year, the reality of it is less severe than the reports indicate: “The storage report as of 31 October reported 13 million boxes, versus 18 million last season. It should be noted, however, that last season many grapes could not be sold until very late, were sold at very low prices, or were never shipped. So, this year growers have been very careful to pack only what they can reasonably expect to sell at a profit. This means that the true supply difference is not as drastic as the storage report indicates. The 5-million-box deficit shown on the report would indicate a 10-day earlier-than-usual transition to the import season but, in reality, the transition will happen only 3-4 days earlier than the average.”

Pandol says: “Generally the U.S. market will stay with California as long as they can reasonably do so. Canadian retailers have more of a United Nations approach, with multiple origins in the market both during and after the California season. The Peruvian grapes will be hitting the market in December. Last season, Peruvian growers who began shipping too early found an indifferent market and experienced difficulty competing with California on freshness. Those who arrived in December, however, did well because of the unexpected scarcity. Still, most of the Peruvian volume is available  for shipment after December. The volumes coming out of Peru are always increasing, but we are never sure to which markets Peru will ship. For a few years there was a lot of speculation that Brazil could be the future for the U.S. grape imports, but that hasn’t happened and currently Brazil has a minimal presence in the market.”

Chile increasing their new varieties
For the past few years, most of the imported grapes during the months of January and February have come from Peru rather than Chile. Pandol explains: “In Peru, they have many newer varieties which come from newer vineyards, rather than the traditional varieties which come from vineyards of all kinds and ages. With the new developments in the north of Chile, however, Chile now has a lot of new varieties coming from new vineyards too, and many speculate that Chile will take back some of its traditional space in the market this coming season.”

“From March onwards we expect all Chilean product. Chilean growers report that their seasons are looking to be on time so far but there are some concerns because of the civil unrest in the area. There is the concern that there will be issues because of the interruptions in transportation and worries that public safety and the safety of the workers is compromised by the protests that have been ongoing in the area. But the season is a still some time away, and hopefully these issues will be resolved by then,” Pandol concludes.