When it is your birthday, it is your treat. Recently, Dutch onion seed suppliers, Broer, Bejo, and De Groot, all had something to celebrate. Broer turned 70. And Bejo and De Groot en Slot have been partners for 50 years. These companies, therefore, held an onion symposium on Thursday, 14 November.

Broer's Director, Siem Beers, had to use quite a few languages in his opening speech. He needed to greet the more than 350 visitors from the global onion sector. On Friday, an excursion day followed. People got to visit Waterman Onions Tolsma Techniek, Gebr. De Zeeuw, and Wentink Groenten. The public open day was on Saturday, 16 November. 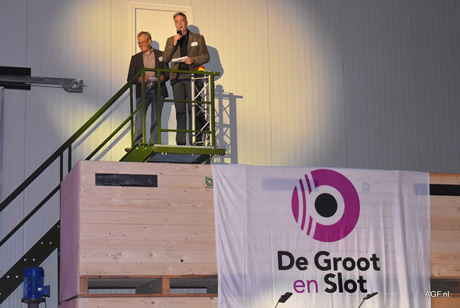 Siem Beers and Gerrit de Groot opened the symposium. Gerrit is De Groot en Slot's former Director. Guests then got a tour of the onion set company's impressive premises. It is located in Creil in the Dutch Noordoostpolder. The company not only boasts the largest condensation dryer in the world. Here, 16,000 tons of onion sets are stored annually. This amounts to 16,000 crates. The building was constructed in 2012. No less than 2,700 piles were used in its construction. The company has been 'off-gas' for seven years now.

Broer has been producing, processing, and selling onion sets for more than 50 years now. They do business in more than 40 countries in Europe and Asia. They also export their products to Canada and the United States. In 2002, Bejo/De Groot en Slot decided to set up an onion set breeding program. They wanted to accelerate the breeding of good varieties. The 'Quality Inside' onion label was, thus, born. In 2004, Broer was taken over by De Groot en Slot. They are the exclusive producers of this label.

The company grows onion sets at various locations throughout the Netherlands. They also cultivate these with their Russian partner, Lukamore LLC. This is for the local Russian market. Broer has a partnership with ESC in the United Kingdom. They work with Bejo Iberica in Spain too. Together, they cultivate first-year onion sets for the Mediterranean market. 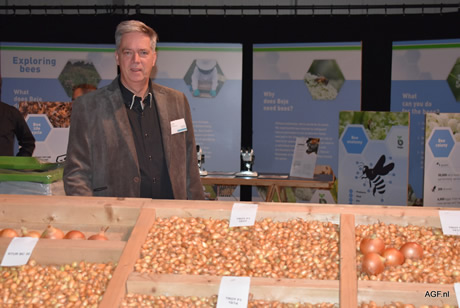 "Growers generally choose second-year onion sets based on how early there are. Demand from the processing industry, thanks to this product's higher dry matter content, is also a consideration. Then, they also take the impressive Eastern European hobby market into account," explains Siem Beers.The company is currently investing heavily in its second location in Andijk too. After the tour, guests got the chance to make contact with a few of the business park's supply companies and visitors. Afterwards, they could attend an interesting symposium.

It takes 15 years before you can sell a variety
Bas van den Hemel is the Breeding Manager at De Groot en Slot. He took the lead at the symposium. First, he showed on a world map where onions are cultivated. It is only in Antarctica that this crop is not cultivated yet. But, perhaps climate change will change this. De Groot en Slot and Bejo breeds varieties suited to cultivation all over the world. The magic words in breeding are 'selection' and 'hybridization'. It also, however, requires patience. It takes about 15 or 16 years for a new variety to come onto the commercial market. The company currently has 6,211 unique trial field numbers. These can be found in 37,048 trial fields across the world. 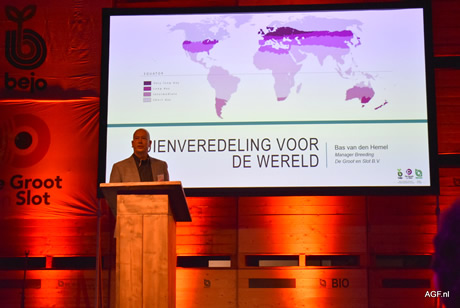 In Africa and Central and South America, onions are often a staple foodstuff. Meanwhile, in Europe and the United Kingdom, they are, instead, a niche product. Preferences vary considerably by country too. For example, Dutch people prefer yellow onions while Mexicans like white ones. Peruvians show a preference for red onions. In onion breeding, the length of the day is also extremely important. "Every half hour less or more light demands a different onion. That is, therefore, a difference between the Netherlands and the South of France," explains Basen.

The focus used to lie with yield per hectare. This attention has now turned to the onions' disease resistance, root systems, skin, firmness, and sprouting. This switch is thanks to the challenge posed by climate change and regulations." Disease resistance is an important parameter when it comes to onions. However, anyone who expects a 100% resistant onion will be sorely disappointed. "There is no such thing. Where you to achieve this, the fungi would simply mutate," says Van den Hemel.

"That is why resistance breeding never stops," "Fortunately, several of our varieties are highly resistant against several diseases. These include fusarium, pink root, and downy mildew." The Manager was asked about the use of the Crispr Cas technique. He answered that, at the moment, this is only allowed to be used in research, not during breeding. "It could, however, offer opportunities for us. We could take the next step. We will certainly be interested as soon as the possibility presents itself.

Organic onions still available in June
The second speaker was Roger Custers. He farms in Biddinghuizen in the Netherlands. Roger started cultivating onions organically in 2014. As of the coming season, his business will run 100% organically. He has also installed a condensation drying system in his crated storage facility. He stores about 2,000 crates of onions and 300 crates of carrots. "In 2017, we proved we can keep supplying organic onions up to as late as July. Everyone said this could not be done with organic onions. But we did it." 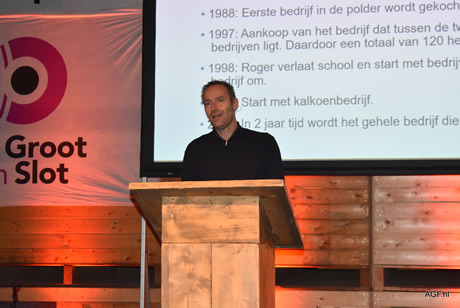 Custers grows mainly organic onions and carrots. This is thanks to good contacts with buyers. However, due to crop rotation, he also cultivates spinach - "There is a very high demand for this since it is difficult to grow in other parts of Europe" - beetroot, chicory, and sweetcorn on alfalfa. This farmer chose to deep plow all his dense soil plots to a depth of 1,6m. "Aerated soil is a must. If I were dependent on dense soil, I would move," laughs Roger.

Roger was always interested in organic farming. His conventional business was very profitable, too, though, which is why he did not switch sooner. He does not have a moment of regret, now that he has made the transition. "Before I would be spraying my crops in the evenings. Now I sit on the couch," admits the farmers, jokingly. "I have also noticed that organic products are truly hardier than conventional ones. No soil and contact pesticides are used. This practice makes the plant more pest-resistant too. I expect, in ten years, we will almost reach conventional yields."

In 2050, 150 million tons more onions needed
No onion day is complete without a presentation from Gijsbrecht Gunter. This time too, the chairman of the Holland Onion Association, gave a fiery talk about the worldwide trade of the globally most-consumed vegetable. According to him, several areas offer opportunities form onion exporters. These are not only population growth - "In Africa, we will go from 1,4 to 4 billion people by 2050" - and the economy. Fruit and vegetable consumption in, mainly, Africa, Asia, and Australia are also good chances for this sector. "In 2050, we need an additional 150 million tons of onions." 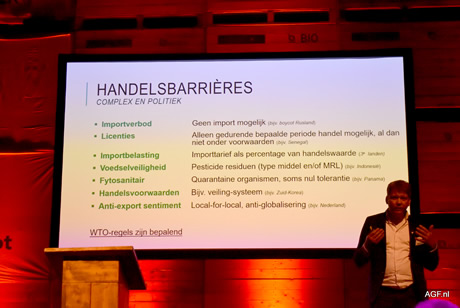 Gunter states that the expansion of the Dutch onion acreage is not, in fact, unlimited. This country, however, has a massive logistics hub function. This is a good starting point for re-exporting onions. He could also not resist bringing up the current political discussion. Should the Netherlands become an export country, if needs be?

"If we do not export, someone on the other side of the world could starve. Tonight, 820 million people will go to bed hungry. They live in countries where onions are a basic foodstuff. We are just are a gap filler. We can supplement global shortages in no time. Even between all the trade barriers and import restrictions."

The UK imports fewer onions every year
Last up was Ed Pissarro, Agronomist from the British P.G. Rix Farms Ltd and the Stourgarden packaging plant. He gave a talk about the developments in the British market. The onion acreage in the UK totals about 10.000 hectares. In 2019, the crop is being called average. This, after a memorable 2018, where the onions sprouted non-stop. This year, British onions sets have an average yield of 55-60 tons per hectare. 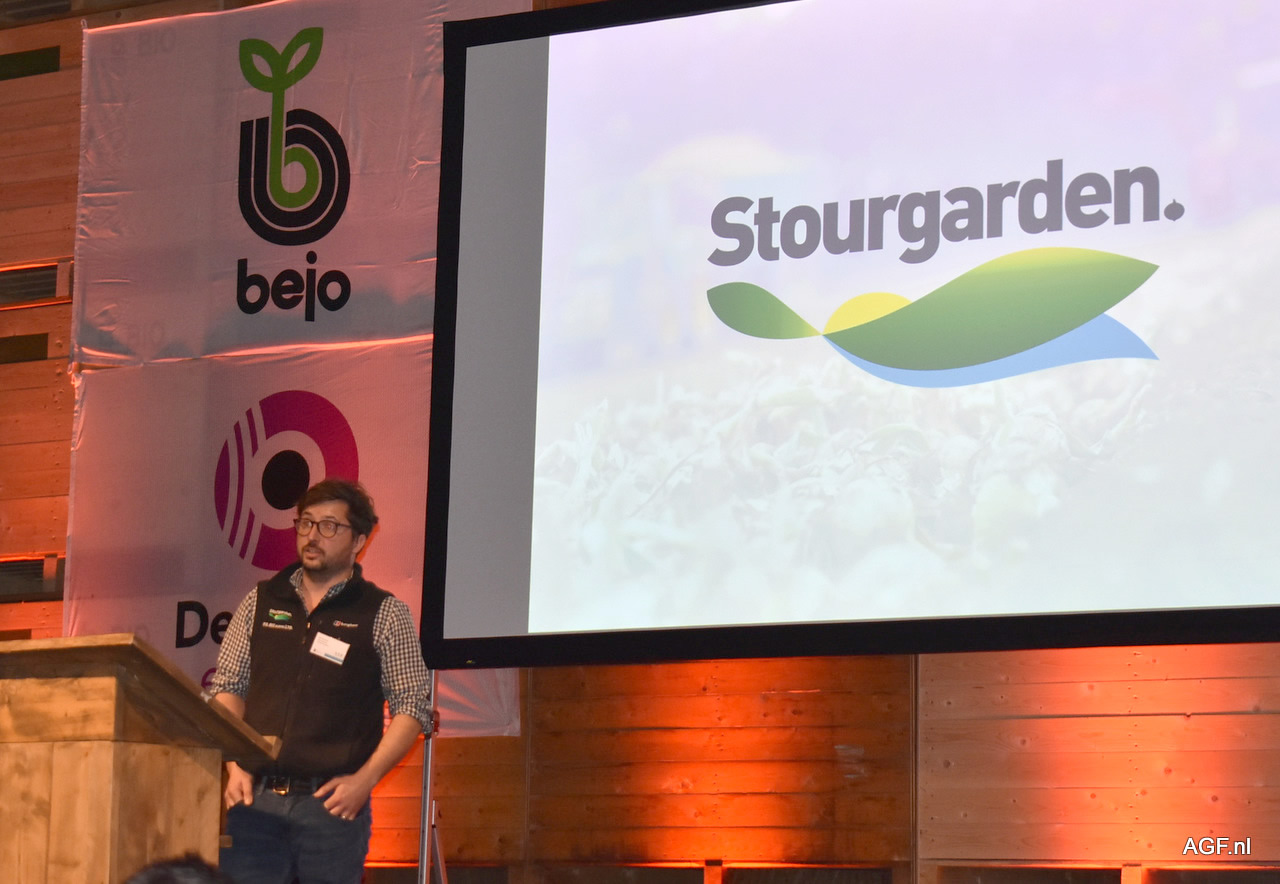 P.G. Rix Farms Ltd has 2,450 hectares of onions. The availability of water is a huge issue in the UK. Mildew, fusarium, and sun damage also pose the necessary challenges in that country. According to Ed, the Brits have managed to extend the season. This is by a week, on average, per year, for the last ten years. The Netherlands and Spain are the largest onion exporters to the United Kingdom. However, last year a lot of onions from other countries reached the British shore too. They came from countries such as New Zealand, Egypt, and China.

Stourgarden is Tesco's preferred supplier. But there is stiff competition from Aldi and Lidl on that British retail market. In October 2019, Lidl increased its share to 15%. This share is compared to the previous year's 13,7%. Pissarro goes on to say that there is an unprecedented growth in the onion market. This is being caused solely by price increases. Aldi and Lidl are the only supermarkets that sell onions at below £1/kg. According to Ed, traditional meals are in decline. This decline could be good for onions. On the other hand, other vegetables, such as tomatoes, cucumber, and lettuce, are being eaten. They are used in meat-free meals.