The table grape harvest has kicked off in the Orange River with both white and red seedless varieties. This area produces approximately a third of South Africa's grapes. Their season seems between five and seven days ahead of the usual schedule and the region's cooler weather is aiding colour development, the South African Table Grape Industry (SATI) notes.

The northern region around Groblersdal and Marble Hall is already in the thick of things. The region has seen a fair bit of rain during the past few days but growers are well-versed in covering harvest-ready blocks with plastic. 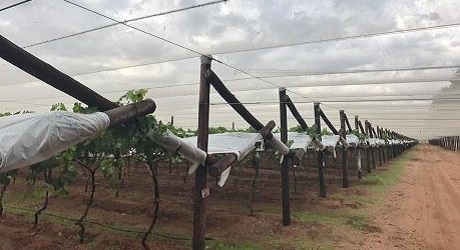 The Olifants River region is also a bit earlier with red varieties already colouring (expected to start in approximately a month).

The Hex and Berg River regions had good rain three weeks ago which helps to allay water shortage anxieties, but which brought with it the need for increased thinning to prevent too many berries setting in a bunch, particularly on the mid- and late-season varieties.

Europe looks quite different to last year's oversupply and there's a sense of cautious optimism in the industry, not only with regards to the UK and EU markets but also for what an earlier crop could mean in terms of shipping supply in time for Chinese New Year.

The industry's export figures reflect a picture that differs significantly from last year.

The initial crop estimate remains unchanged, ranging from a low estimate of just over 61 million to 67,8 million cartons (4.5kg equivalent) at the high end. Read more about the first estimate for the 2019/2020 season.