T&G Pipfruit exported 750, 40-foot reefers from its Otago coldstore in 2019 and expects the coldstore to process between 900 and 1,000 containers next year. Each reefer weighs between 26 and 32 tonnes but with no docks at the coldstore must be positioned on the ground for loading. During peak season, the coldstore packs and dispatches 10 – 20 containers a day. 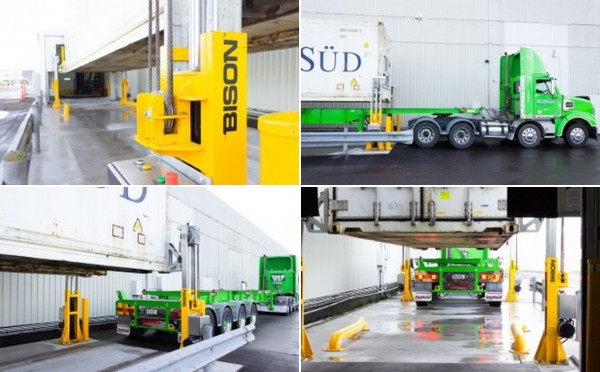 With side loaders in high demand around the city, this inevitably led to downtime with delays as T&G Pipfruit waited for side loaders to service the site. It was also expensive, due to the premium rates charged for side loaders, compared with skeletal trailers. The other issue for T&G was the fact that only a few transport companies in the city had enough side loaders in their fleet to deliver the service T&G needed, limiting T&G’s choice of service provider.

T&G has gained independence when it comes to grounding its 40′ reefers for loading. by using two C-Lift A32F systems on site, in two dedicated loading areas. T&G are now relying on skeletal trailers from local transport companies only to service the site. The skeletal continue to shuttle containers between the port and coldstore, delivering an empty to one loading area, then collecting a full container from the other loading area for the return trip to port.

Each container transfer takes only 5 minutes. The reefers can  be loaded in about 15 minutes, and then lifted for collection, ensuring better turnaround times during high season. T&G are no longer dependent on just one service provider, and have the freedom to work with more local haulage companies. This, together with removing reliance on side loaders, has lowered costs and given more independence and control over T&G’s container logistics.

By adopting Bison C-Lifts, T&G now have a cost effective alternative to sideloader services. By using just skellie trailers to service their coolstore, they have cut container haulage costs by 30%, eliminated costly downtime waiting for swing lifts to arrive, gained move freedom and options around container haulage services and secured more independence and control over their container logistics.

“The Bison A32 has kept my costs down, and made my staff happy, so everyone’s on a winner,” says Barrie Aberhart, site manager, T&G Pipfruit. The payback for the Bison loaders is two and half years and with this volume set to increase in coming years, that will shorten.