"Outside the asparagus sector, the need for cooling has also increased"

The fastest possible way of cooling down asparagus was the basic idea behind the development of the 'Durchlaufschocker' Frigopurmat exactly 30 years ago. In the meantime, the cooling solution has been adapted to today's needs so that it can still be successfully used many years later. The interest is shifting -because of new regulations, capacity expansions and climate change- gradually from the asparagus sector to other areas of the fresh industry. Generally, many more products are being cooled now than ever before, notes Thomas Hermeler, Managing Director of HMF Hermeler Maschinenbau LLC.


The Durchlaufschocker is suitable for both white and green asparagus.

Since its first use in 1989, the process has quickly made a name for itself in German and international asparagus fields. The efficient and rapid cooling solution is appreciated by all customers, from small farmers to major suppliers. The full asparagus crates are transported on a conveyor belt through a tunnel, where they are sprayed with ice-cold water from above. After that, the cooled down bars will reach the cold room via a conveyor belt.

Refrigerants Ordinance, Capacity Expansion & Climate Change
Due to today's Refrigerants Ordinance, a new solution has to be offered, explains Hermeler. They have had good experiences with the so-called dual-fluid circulation system over the past few years, he says. "At the beginning of the nineties, the refrigerant cost 14 D-mark or 7 Euro. Nowadays we are at about 90-95 Euro / kg. At the same time, the existing asparagus farms are expanding their cultivation area and production capacity, which ultimately requires more refrigerant, leading to higher costs. Therefore, the need to find a good solution has increased."

Climate change also plays into the cards of the experienced machine supplier: Average outside temperatures have risen rapidly over the years, which is why everyone who deals with vegetables somehow needs a corresponding cooling solution. Hermeler: "Even in areas where people barely needed any cooling before, cooling has become necessary to keep the goods fresh. In general, there is no doubt that more products have to be kept cool now." 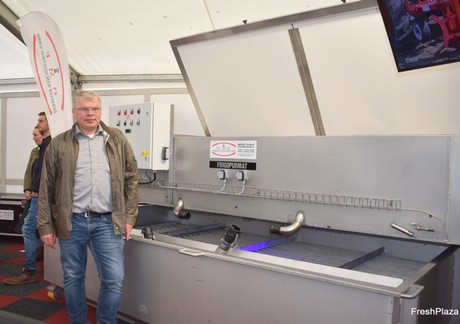 Need for cooling outside the asparagus sector
In the course of this, the target group on the part of marketing had changed completely over the years. While there was great interest in the asparagus sector during the first years after the launch of the Frigopurmat process, today people from the potato and carrot industry, as well as the cherry sector, are also coming forward.

"The demand in the asparagus sector is falling slightly, because asparagus farms have been doing pretty well in recent years. Meanwhile, the fruit area is currently changing, mainly in the cherry area. We have been observing this double-digit trend for about 4-5 years. On the international level, we see an increasing demand mainly in Switzerland, France and Southern Europe," says Hermeler.

ExpoSE exhibitor of the first hour
At ExpoSE, HMF Maschinenbau will demonstrate the Durchlaufschocker and other cooling, sorting and fruit and vegetable processing processes. The long-established company is one of the regular exhibitors in Karlsruhe as well as other asparagus events. "In my opinion, there are now too many events on the trade fair calendar. Nonetheless, the ExpoSE is still the leading trade fair for the asparagus sector, especially for Germany."