Avocados From Mexico is launching its very first television and print advertising campaign in Ontario this month. Developed by Sopexa Canada, the integrated multi-channel program is built around the campaign signature: “Anytime is Avotime!”, with the goal to inspire Canadians to explore the many ways of eating avocados, whatever the time of day or the occasion. 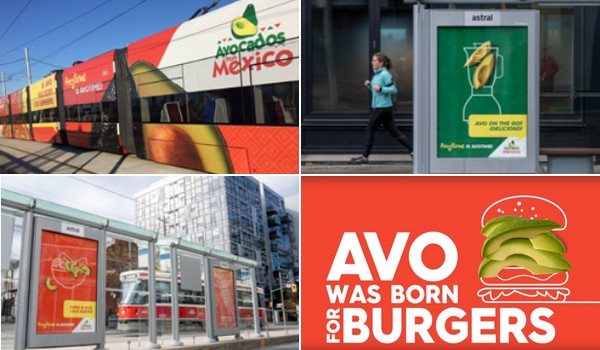 Mexican avocados show their true colors
Avocados From Mexico is expanding its consumer touchpoints
and reaffirming its  position in Canada this year with the
deployment of an all-new colourful media campaign to coincide
with the fall season. The campaign will air on television and
out-of-home media locations throughout Ontario, including bus
shelters, the subway, supermarkets and gyms. A Toronto streetcar
will also be completely branded to reflect the campaign’s theme
and colours


In Quebec, the brand is renewing its partnership with the
Montreal Canadiens hockey team. The virtual Avocados From Mexico logo will be displayed during televised hockey games and promotional materials will be available at various points of sale.

These initiatives will be supported by a robust multi-channel
digital media plan, influencer partnerships, on-site activations
and noteworthy collaborations with some of the country’s largest
supermarket chains.

Even More “Anytime is Avotime!”
Avocados From Mexico’s mission is to encourage Canadians to take advantage of the nutritional value and benefits of Mexican avocados. The Canadian per capita consumption of fresh avocados has been constantly on the rise in recent years, and more than 95% of avocados sold in the country come from Mexico. The new campaign is therefore designed to highlight the fruit’s versatility and the endless ways to enjoy it, using the “Anytime is Avotime!” claim at its core.