On 21 and 22 November an international conference on controlling banana diseases such as Panama disease Foc TR4 and Banana Bunchy Top Virus in the African banana industry will take place in Maputo, Mozambique.

Mozambique is the first African country to be infected with the Foc TR4 strain of Panama disease, which has been present and efforts to contain it in the north of the country are on course since 2013. Foc TR4 is a disease that prevents a banana plant from receiving nutrition through a fungus living in the spoil, and as such has potentially devastating consequences if not controlled.

Plants infected with the Foc TR4 strain of Panama disease

According to BananaMoz, the country’s newly formalised industry association, 1,500 hectares have been lost to Foc TR4 on a commercial banana plantation in the north between 2013 and 2018. Mozambique currently still has more than 17 commercial growers across the country that together utilise around 4,500 hectares of land for banana production and produce over 140,000 tonnes, largely for export.

Banana Bunchy Top Virus (BBTV) has been present in Mozambique for more than a decade and has since been detected in South Africa’s KwaZulu-Natal Province and other neighbouring countries. It is feared that if the spread of BBTV continues in Mozambique, it could threaten all of the 3,000ha of commercial banana plantations in Maputo Province (worth an estimated US$40 million in annual exports) as well as smallholder banana producers, important for food security.

Officials at the Mozambican Department of Plant Health have been receiving training in the identification and eradication of BBTV-infected plants.

The conference aims to share with the wider industry knowledge and best practices from the efforts in Mozambique to prevent, control and contain the diseases, as well as hear from experts from South Africa, Burundi, Turkey, Australia, India, the Philippines and China, as well as representatives from the UN Food and Agriculture Organisation and Biodiversity International on other efforts and strategies to address the challenges facing global banana production. 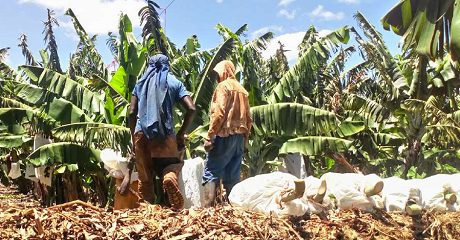 The conference, arranged by the Mozambican Ministry of Agriculture and Food Security in conjunction with TechnoServe, a non-profit organisation based in Maputo, is free to attend (although registrations have closed).

According to Ingrid Sikma, TechnoServe’s programme manager for the banana project in Mozambique, they have been pleased with the response from stakeholders across the continent. “The banana project we run is funded by USDA, monitored by the government of Mozambique and managed by TechnoServe. The project is called the Banana Industry Grants Facility (BIGF), and has as a main objective to support the Mozambican Banana industry controlling and managing with BBTV and TR4.”