France: “It is as if the boletus of the past few years all grew in just one year”

It is an exceptional campaign for the wild mushroom in terms of volumes in France, according to William Trapon of Trapon Champignons. Especially when it comes to the boletus, which came out of the ground in large numbers. “The last three or four years were difficult because volumes were small. This year, it is as if the boletus of the past few years all grew in just one year.” 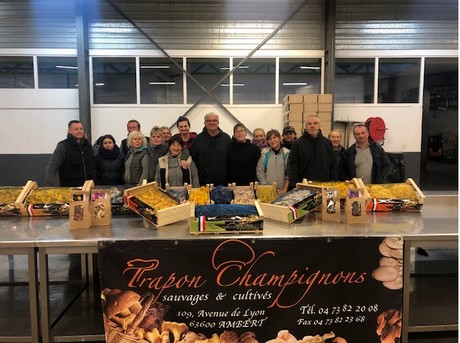 William Trapon surrounded by some of the team

Trapon Champignons commercialized boletus mushrooms non-stop for nearly three months. “It is nice to see this French product again in such large numbers. Besides, the quality is also there.” “Unlike in France, volumes are low in Eastern Europe for this campaign.

William explains that on the French market, it is important to identify the calibers depending on the different regions of France. “If you send to Paris a boletus with a cap of 4.7 or 5.9 inches, they are not interested. On the other hand, if you send small calibers to the southwest of France, they will not be interested either. These different consumption habits are part of what makes the charm of this profession.”

With the arrival of the cold, the boletus slowly comes to an end and Trapon Champignons starts marketing winter products, such as the grey and yellow chanterelles, or the sweet tooth mushroom. “With the rains of the past three weeks, we hope to have an interesting campaign until the end of the year.” Trapon Champignons completes the French production with golden chanterelles from the United States and Canada.

According to William, sales are always a bit calmer as soon as the boletus ends. “The boletus is the locomotive of mushrooms. In some regions of France, talking about mushrooms inevitably means talking about boletus. We supply some wholesalers who only buy boletus mushrooms. It is an interesting product, particularly because it is difficult to work with. It gets damaged quickly.”