'Spanish sweet peppers dominate the market, conclusion of the Dutch season not far off'

Spanish sweet pepper shipments were dominating the market, quite obviously. The conclusion of the Dutch season was not far off and it had its effects had already reached some markets. The traders kept their prices on the previous levels for the Spanish products if they still had access to Central European batches. Where Dutch produce was no longer available -or just sparsely available- the prices of the then almost unchallenged Spanish goods went up.

In Frankfurt, sometimes sales were rather slow, so the prices there dropped off. On several occasions, the prices for Turkish imports had to be lowered due to excessively high availability. In Munich, the sales of Dutch articles went rather slow, as these were more expensive than their Spanish counterparts. For the batches from Spain, a wide price range was established here, depending on the caliber size. There were Polish goods available only in the capital. The availability of these cheaper products there made sure the demand for Spanish goods did not really grow. A few Belgian and domestic shipments of goods rounded off the stocks. 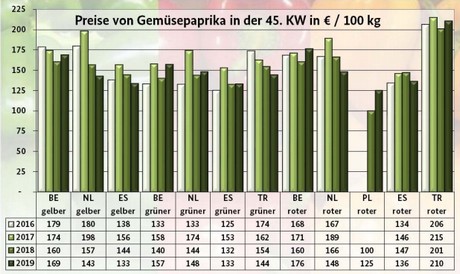 Apples
Germany was the nation that shaped the market for apples. All in all, the massive supply was enough to satisfy the demand. At times, the latter was somewhat limited. The prices often remained at their previous levels.

Pears
The markets were sufficiently supplied with goods. In general, the quality of the lots was quite convincing. The interest centered on Italian Abate Fetel, which were quite popular.

Table grapes
With the increased availability of South American imports, there was more movement in the range. Brazil sent over Thompson Seedless and Crimson Seedless. Peru specifically sent various IFG varieties, as well as Crimson Seedless.

Small citrus fruits
Clementines were predominant, and they mostly came from Spain. Because of the rainy weather, the demand intensified in general, but thanks to the immensely extended influx of goods, this did not pose any problems.

Lemons
Spain dominated the events, more so that Turkey. The supply was sufficient to satisfy the customer's demands. The prices developed unevenly.

Bananas
Their sales generally were somewhat less. Nevertheless, after the holidays demand had picked up a bit. On various occasions, the traders were then able to increase their demands throughout the product range.

Cauliflower
The first French goods joined the domestic ones, who were much more available. Despite limited availability, in general demand could be met  without any problems.

Lettuce
For lettuce, the presence of the domestic goods decreased sharply. Thanks to the scarcity of supply, the distributors raised their prices, sometimes quite strongly. The Belgian products were very expensive due to the conditions, so that the so that the distributors dropped their disposition.

Cucumbers
Spanish and Greek articles formed the basis of the assortment, which became smaller quite slowly. The limited access met with a rather quiet demand.

Tomatoes
The Netherlands and Belgium prevailed in this segment. Morocco mainly provided round tomatoes and Spain panicle tomatoes. Italian, Polish and native shipments rounded off the market.