Peculiar papayas: “We have an affinity for the fruit”

In Trichardtsdal, Limpopo Province, AAL Boerdery, a family farm, grow their papayas which are marketed under the well-known Peculiar brand, in what is one of the best papaya production areas in the country. 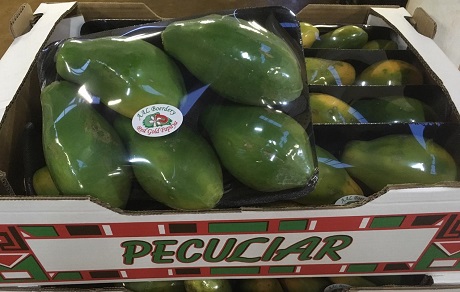 “We have an affinity for papayas, we put our heart into growing them,” says Theuns Kotzee. “We aim to put a very good product out there.”

They send their fruit to local markets on the same day as harvesting, in refrigerated trucks to Durban and Cape Town, and tautliners for the inland markets. Their striking brand name comes from the name of the farm, almost thirty years ago bought from the government. 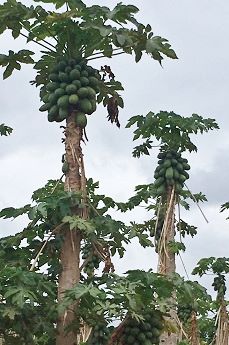 “In our view, papayas are a winter crop. In summer there are a lot of types of fruit available which all compete for consumption, but in winter there is less competition.”

He points out that the winter harvest produces larger fruits, because this crop matured during the favourable conditions of summer, while the summer crop, maturing over winter, has smaller sizes.

Depending on water availability – they’ve been in a drought for three years now – orchards are renewed after three years. In high summer when papaya volumes are lower, their brinjals (aubergines or eggplant), peppers and tomatoes come to the fore.

“You need to have a plan for your papayas”
“The South African fresh produce market is under a lot of pressure in terms of purchasing power,” Theuns continues. “It’s not like four or five years ago. When you speak to the market agents they tell you that pallets have had to be discarded.”

Papayas have a shelf life of maximum two weeks after leaving the farm. 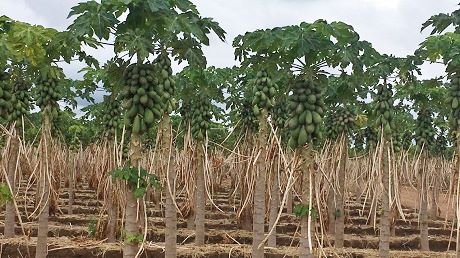 Papayas are a luxury fruit and the market is sensitive to oversupply. AAL Boerdery has around 45ha in production at a given period, trying to maintain between 80 tonnes and 100 tonnes per hectare.

“But you need to have a plan for those papayas. You can’t store them, they’re not butternuts. As we always say, when the pawpaw hits the fan…”.

Their summer rainfall has just begun in earnest and they’ve been fortunate regarding hail for the past two years. They are considering covering their orchards with nets, which would also provide protection against sunburn.

The ‘Peculiar’ papayas have seeds, just as, Theuns notes, God intended upon creation of the fruit. In fact, he says, not only do papaya seeds have health benefits but unexplored culinary uses too. “The seed can be dried and then ground over food like peppercorns. It has a bit of a bite, it’s very nice.”