This year's cabbage harvest is currently in full swing, as well as the Brussels sprouts campaign. Although Brussels sprouts are more of a niche crop than other, more established cabbages (white, red and savoy cabbage), in recent years the cabbage sprouts have become an integral part of the winter supply in the retail sector. In the meantime, the regional products are already available to all well-known chain stores around the cold season, says Eric Müller, who has been cultivating Brussels sprouts in Dithmarschen for over 20 years.

In mid-September, the first sprouts of the year were harvested, at roughly the same time as in the previous year. Currently, the marketing is -in parallel to the expanded offer- rather quiet, Müller reports. "There are no major promotions within the trade. We hope that the temperature will soon go down so that the sales can pick up again." 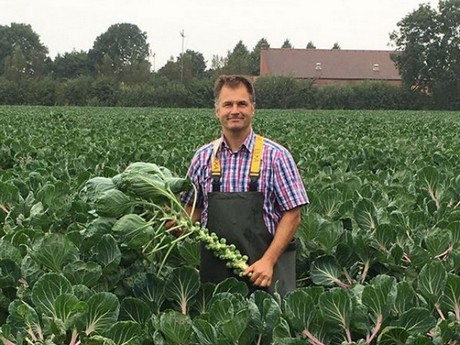 Eric Müller of Hof Helse LLCS has specialized himself in the cultivation of Brussels sprouts. In the meantime, the firm manages an area of ​​around 100 ha. The goods are freshly prepared directly from the field, sorted and packed on site in the company's own production hall. Picture: Netto / Küsten Gemüse

In parallel to the regional products, the German food retailer also imports goods from the Netherlands. "I'm currently in the middle of a puzzle, because the Dutch colleagues sometimes get more money for unpacked goods than we do for the packed Brussels sprouts," says Müller, who delivers his goods to food retailers via various retail companies. The Brussels sprouts are grown in Germany on about 600-700 ha and there are only 4-5 professional producers who fully deal with these vegetables.

Increasing sales in weeks 50-51
It is above all the large-size goods that are well received in the German market, says Müller. "We primarily offer food retailers goods with a diameter between 30 and 40 mm. Everything else barely sees any trade. "Sales are still more focused on the pre-Christmas season:" Depending on the weather, December usually starts quietly: the supermarkets expect us to double or triple our production volume in week 50/51. In the beginning-middle of January, demand is declining sharply and we want to be done, although sometimes we are ready to deliver until the beginning of February."

Secondary varieties & product packaging
According to the experienced grower, the common sprouts still see the highest demand, in large quantities. Secondary varieties such as Purple or Flower Sprouts are only suitable for the high-end kitchen, which is why their sales are rather limited. "We also tried to grow these a few years ago, but we did not find a market for it. The main problem is that they are not really storable. Therefore, retail has not generated much demand."

All in all, the Dithmarscher looks forward to the near future of free-range culture. Through its own production hall - in which the goods are sorted and packaged - the grower is equipped to be able to supply domestic retailers for the next few years. "In terms of packaging, we have mostly switched to flowpacks. Depending on the store chain, we pack almost exclusively in 500 or 750 gram units."