Winning fruit farmer: “I refuse to become a statistic”

On the farm Loufontein to the north of Villiersdorp, Western Cape, Sewis van der Horst is on a mission to show that there comes a point when the phrase ‘emerging farmer' doesn’t make sense anymore.

In 2016 he concluded a thirty year rental agreement with the state, took possession of mostly topfruit orchards and gave himself three years for his turnaround strategy.

He is content with his progress and the judges of the AgriSA New Harvest competition, in which he has just been announced national winner, seem to agree. 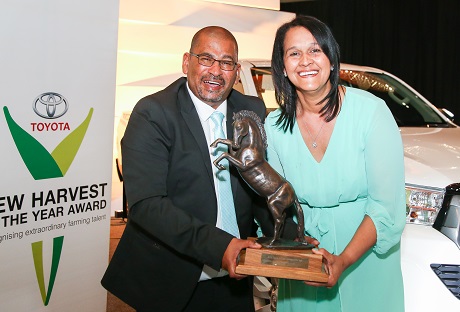 Sewis and Henriette van der Horst at the awards ceremony

Last season a block of Goldens that was producing 47 tonnes/hectare when he took over, had a yield of 90 tonnes/ha.

“I refuse to become a statistic, to be part of yet another failed land reform project,” Sewis declares. He grew up as the youngest of six children, the child of farmworkers on a Ladismith stone fruit and table grape farm. “I’m proud of my Ladismith heritage. I always wanted to be in farming – but I didn’t want to be a farmworker, so that’s why I attended agricultural college and today, I work for myself.” 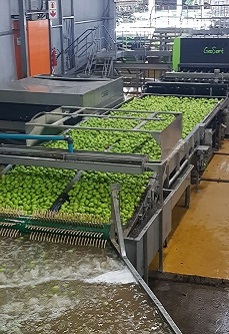 For himself but certainly not alone: he emphasises the role his strategic partner Two-a-Day, who packs his topfruit, and Tru-Cape, formidable fruit marketers, have played in his success (right: his early Bon Chretien pear crop from last year).

“In partnership with them you feel secure. It just makes sense to be part of a larger corporation that you know takes care of your fruit. And more than that: they have also helped with production loans.”

He is also generous in his praise of his neighbours who have assisted with expertise and support.

Perfect weather during flowering
His pear harvest (early Bon Chretiens, also called Williams or Bartlett, first) will start in the first week of January, followed by Royal Gala and Packhams. The climate during flowering was perfect this year (a welcome change to last year) and the harvest looks very good, he says. In fact, on pears, particularly early BCs, they manage the yield downwards, to around 60 tonnes/ha, to maintain size, and at the moment they’re thinning out for cosmetic reasons on the tiny apples and pears.

There’s a small block of nectarines on the farm, too small for export trade – the crop is off in two weeks – which go to local retail, but expansion in newer stonefruit early varieties is a consideration for the future.

Western Cape Department of Agriculture's role in his success
His area’s microclimate is too hot to grow all of the bi-coloureds he would like, like Pink Lady or Sundowner. It’s not so much colour development that is affected, but rather colour-fastness. ”When it gets really hot, on some cultivars like Rosemarie pears the colour just burns out of the fruit.”

He has added Tru-Cape’s recent Gala introduction, the Bigbucks cultivar (marketed as Flash Gala), an apple noted for its colour and exceptional packouts. He financed the expansion through grants received from the Western Cape Department of Agriculture.

“My farm is certified like all the other farms, my fruit quality is indistinguishable from the fruit grown on other farms. There is nothing about my fruit that tells you that I am an emerging farmer.”