Namibian grape season back to normal

The Namibian grape harvest is running 7-10 days earlier than last year and the first volumes arrived in Europe at the beginning of this week. Last season was tough for the Namibian producers with a lot of volumes from Peru still on the market when they shipped. This year is looking much better.

“Last year was difficult from a price point of view, but there is a lot less grapes from Peru on the European market this year,” explains Willem Visser from Silverlands Vineyards. “We are earlier, and I expect to see a more evenly spread harvest. The Aussenkehr valley is expecting a normal season with volumes of between 6.5 and 7 million cartons.” 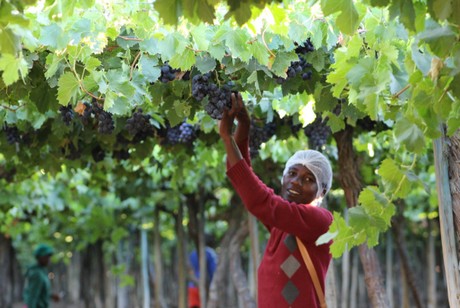 Last season Peru shipped large volumes to the European market as it was thought that the US market would be full, this clashed with the Namibian and early South African arrivals which were later than normal.

Willem said there are not a lot of new vineyards coming online, mostly older ones are being replanted with new varieties.

Weather during the growing season has been good with even temperatures and cool nights which have produced a good, even berry size and colouring. There is no need to wait for the colour this season, just for the sugar levels to increase.

South Africa’s Northern Cape is also early, but Willem said this does not mean extra competition in Europe as they will still be slightly later on every variety.

Although some Namibian grapes have already arrived in Europe the main volumes will arrive in three weeks’ time for the pre-Christmas market.

“This is the best time for us, and we try to get 60% in before Christmas, but it can create a bit of a bottle neck in supply, so you have to get the timing just right.”

Silverlands also exports some volumes to the South East Asian markets. The first white varieties to arrive are the Early Sweet and Prime, the reds are Flame and ARRA 29 followed by ARRA 13.

Willem admits that the consumer may not know the difference between all of the new varieties on the market, but they know what looks and tastes good.

“It is expensive to replant but as a grower you need to do this as customers want these new varieties. The new varieties are very fertile and colour easily they also look and taste good. We have invested a lot in the Candies such as the Candy Hearts and Cotton Candy and are very excited about them. We also have Sweet Nectar and Candy Drops that are going to come next year. Silverlands is also strong on the other IFG varieties like Sweet globe and Sweet Celebration with most blocks still very young and will reach full bearing only in 2020.