Winter is around the corner in the Northern Hemisphere. The cold is boosting the demand for ginger, especially now that there is growing awareness about its health benefits. The Chinese and Brazilian seasons are coming to an end, which means that traders have to deal with a limited supply. The falling volumes and the rising demand ensure high prices. The season is in full swing in Peru. While this country had a small harvest last year, volumes are considerably greater this time round. 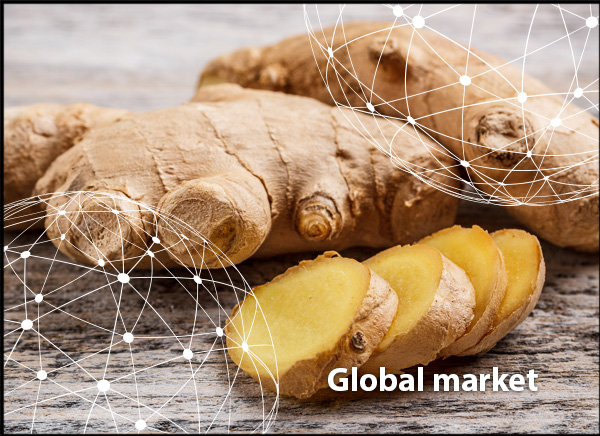 Peru: Organic ginger is gaining popularity
Although China still dominates the global market, Peru has been on the rise in recent years. The season started in May, a month earlier than usual, and is expected to continue until February. "Normally, we ship the first batches in June, but this year we have started in May," says one exporter. “This has everything to do with last year's situation. At that time, there was not enough Peruvian ginger to meet the demand, which resulted in high prices. Therefore, many growers started planting earlier this campaign.” The season is looking good in terms of quality.

95% of Peruvian ginger is grown organically, partly due to the favorable growing conditions in the jungle. In Peru, ginger is marketed as a premium product and the market share is growing. The exporter says that “our harvest is already 50% greater than around this same time last year. By the end of the season, we hope our total harvest to have increased by 120% compared to last year."

November marks the start of the peak season. “The campaign always kicks off slowly, because not much ginger is consumed in the summer. We were able to ship stable volumes throughout the summer, but there is significantly more demand in November and December. The demand is starting to rise above the supply. This is pushing prices up, which is normal for this time of the year."

The majority of ginger grown in Brazil is conventional. Due to the high volumes of organic ginger coming out of Peru, the Brazilian growers aren’t seeing enough demand for the organic varieties. The biggest ginger-growing area is in the south-east Brazil, with some volumes coming out of the south of the country as well.

The Netherlands: High prices until the end of February
More and more people are discovering the health benefits of ginger, which means that the demand is increasing every year. The price of conventional ginger is currently relatively high compared to last year. The high and rising price is a result of the growing consumption due to the colder weather and the limited supply from China. The new harvest will still take a month and a half to arrive, so a Dutch trader does not expect the price to fall until the end of February.

Belgium: Demand increases due to colder weather
The demand for ginger has been increasing sharply over the past month due to the colder weather. This has caused prices to rise. Yet the market is currently fairly healthy, says a Belgian trader. Since the old ginger stocks from China are running out and the new harvest is not expected until more than a month from now, prices should remain stable until the end of the year. In addition to the rising demand for Chinese ginger, the demand for Brazilian production is also growing considerably. From a qualitative point of view, the Brazilian ginger is also very good, says a Belgian trader.

Germany: Demand growing every year
The ginger currently available comes mainly from China and Peru. The Peruvian season roughly lasts from September to December, depending on market demand. According to one importer, the better quality goods generally hit the market in February, as soon as the Chinese harvest season begins. Worthy of note is that China is increasingly paying attention to quality control and hygiene requirements, simply because the European market demands it.

In the long term, ginger is becoming increasingly popular in the German market. "We still see a slight increase in the demand every year (around 10-15%), partly due to cooking shows and Asian restaurants." In general terms, ginger prices are normal for this time of the year. “The conditions in the ginger market tend to remain stable all year round. Sometimes, slight changes are observed if the retail organizes an advertising campaign.

There are certainly differences between Peruvian and Chinese ginger, says the importer. The ginger from Peru is somewhat narrower, smaller and shinier, while that from China is somewhat thicker, with a matte skin. The Peruvian also has a slightly more intense taste. In recent years, cultivation projects in Germany and neighboring countries have sprung up like mushrooms. For the time being, however, importers see no competition in that production. "They have also tried to grow ginger on a large scale in Greece and the project has failed miserably."

France: Volumes are starting to fall
The supply is currently limited; as a result, prices are very high. This situation is expected to continue at least until January. "The Chinese volumes are almost running out and the Brazilian season is also coming to an end," says one importer. "The month of January is actually always difficult for ginger, because there is little supply then." The quality of Chinese ginger has been good this year.

Italy: Fresh ginger hard to find; rising interest in the crop
China, Vietnam and India are the main producing countries. In Italy, ginger is mainly used in dried form; as flakes or powder, for example. Fresh ginger is hard to find, but interest is growing. Journalists from blogs and magazines and food experts are bringing light to its nutritional properties, and consumers are increasingly using ginger for tea and juices.

Ginger prices remain stable almost all year round and oscillate between € 1.80 and € 2.30 per kilo. Ginger is mostly sold in the fall and winter. In Italy, imports come mainly from China, Brazil, Thailand and Peru. In Italy itself, the crop is not grown on a large scale, but in small gardens, greenhouses, tunnels or by private individuals. Four years ago, a company in the Bergamo province started growing fresh ginger in greenhouses. This production is harvested between October and December and is intended for the local market.

A brand new development on the Italian market is the birth of the Consorzio Zenzero Italiano, the first 100% made in Italy supply chain that will guarantee the quality and origin of the product with its brand. The members of the consortium are large fruit and vegetable companies such as Valfrutta Fresco, Agrintesa and Del Monte, which have collaborated with Agritechno Srl in the creation of the project. The consortium will start marketing ginger at the end of 2019. The production will be carried out by a number of Italian companies in different growing areas, mostly in central and southern Italy. Both conventional and organic ginger will be grown.

United States: Limited supply and high prices
"There is currently a lower supply of ginger from Brazil and China," says one importer. “There is not much Chinese product on the market yet. As a result of the rising costs, prices have risen considerably in recent days. The Chinese ginger is quite wet on arrival and there seem to be some quality issues.”

“In Brazil, the season is now coming to an end, which means lower volumes. The quality has been good this year. ”Normally, the last Brazilian volumes are shipped in December or early January. Around the same period, the domestic supply and that from other countries starts to get going. “Last January, almost nothing came from Hawaii due to a bad season. Similar problems are expected this year, but Thailand should be able to fill this gap.” Thailand is able to supply the product for around six to seven months a year.

Peru is currently supplying organic ginger to the US. “A lot has been arriving via Miami and LA, but those volumes are now starting to fall. "Peru appears to be dealing with a lot of rainfall, so they are reducing their shipments." This year, Peru has supplied more organic ginger than ever. “Last year, the harvest was very small. As a logical consequence, everyone planted more this year."

Organic Mexican ginger is expected three months earlier than usual this year. This could have a major impact on the market. “Consumers prefer Peruvian ginger, so it will be interesting to see how this works out. Most organic ginger traders do not yet need extra volumes, so prices could be affected by this.” The peak in the Peruvian supply is expected to be reached in July.

China: new harvest is coming on the market soon
The new harvesting season for the 2019-2020 campaign in China began in October. Last year a large part of the harvest was affected by the abundant rain, which meant there was less supply on the market. This year the harvest has also been affected by the drought during the growing period and has therefore fallen by around 15-20%. The price is very high at the moment, the supply is low and some companies have sold out their stock of the previous season. The new harvest must first be processed before it can reach the market. The new crop will come on the market in November or early December. Whether the price will fall is not yet clear, because demand is still very high abroad and in the local market.