“With kakis, later is better”

Up until recently, the kaki was practically unknown to Dutch and Belgian consumers. There is still a lack of general knowledge about this fruit. The prospects for the Spanish season that started in October are good.

Expectations for the season
“There is ample availability on the market this season,” says Floris-Jan van Os of the Spanish company, Kakifresh Nature. “Compared to the previous two seasons in Spain, there have been no problems with the weather so far this year.”

“We are, therefore, facing a stable season with an expected production of about 650,000 tons. This ensures good availability of the variety we trade in - the Rojo Brillante. The main production area, Valencia, produces 80% of the available kakis.” 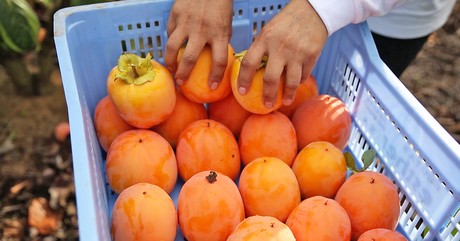 “We are also developing more and more areas in the Huelva region. This is to spread the risks of an eventual bad crop due to adverse weather conditions. We are not only working with our own cultivation there; we also have a partnership with growers who supply us exclusively,” explains Floris-Jan.

“The recent storm in Valencia has hardly any impact on kaki production. “The damage that was caused is inconvenient but limited. October’s high temperatures were, however, troublesome. They resulted in a delay in the fruit’s coloring and, therefore, also a delay in its harvesting.”

First kakis
“We have begun with the harvesting. At the start of the season, Ethefon is often used to ripen the kakis, which is something we do not use here at Kakifresh. We also began a little later. Although the current top prices make it interesting for the free market, retailers did not benefit, since it at the expense of the product’s shelf life. This results in more loss in the supermarket,” continues Van Os.

“For this reason, we have advised our clients that it is smarter to rather start later. CO2 treatment is also vital. Kaki fruit naturally contains a certain amount of tannin, which makes it taste a little bitter. This flavor is why they must be treated with CO2 before they can be eaten. We package the fruit at one of our partner, Frutas Esther’s, packing plant. They provide this treatment too. This must be executed correctly, and expertise is important here.”

Russian boycott
The kaki, however, remains a relatively unknown fruit on the European market. The major Dutch retailers never had much interest in offering kakis in their assortment, but this is changing. “This all has to do with the Russian boycott on European fruit and vegetables,” adds Floris-Jan. “Russia was an important sales market for Spanish kakis, but the ban put an end to that.”

Traders had to sell their kakis on the Northwestern Europe market, where this product is not as well-known yet. They are trying to tap into new markets for this product in Asia, the Middle East, and North America. These have, however, not yet taken the Russian market’s place. As a result, traders were forced to switch to trying to penetrate the European market.”

“We have since noticed that the kaki is becoming better-known among consumers. It is a typical seasonal product that follows on the Spanish stone fruit season. Kakis are mostly eaten as fresh fruit. They can, however, also be used in desserts, but we certainly have a world to create there,” says the Account Manager. 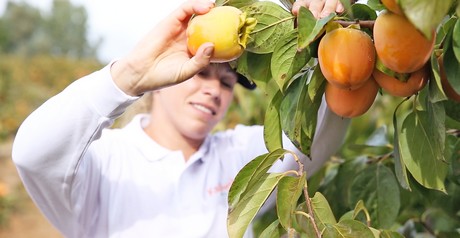 Year-round supply?
Although it is a seasonal fruit, the kaki can also be offered year-round. “We are looking into the possibility of selling the kakis outside of the Spanish season. But the challenge lies in the variety we have on our range. The Rojo Brillante is not grown in every production country. For example, the Sharonfruit comes from Israel and the Fuyu kaki from Brazil.”

“In our opinion, these are not the best-tasting or highest quality kakis. Our goal is then to be able to offer Rojo Brillantes throughout the year. We are looking into developing our own cultivation in countries such as Uruguay and Peru too. This development is, however, a process that is going to take time. But, for the upcoming Spanish season, we have enough kakis to sell,” concludes Floris-Jan.