Pacific Produce grow grapes in different locations in Peru so from a global perspective they are only a small way through their season which starts with departures in September and ends in February.  "However from a European perspective for the seedless grapes we are reaching the half way point already and the large part of the volume has already arrived or is on the water," according to Rob Cullum from the company.

"The global situation is a little bit confusing this year as some factors like the USA/China tariff “war” is changing the map. The demand for grapes in Asia is much higher and earlier than last year and that also happened in Canada.  Even the USA is starting much earlier so it appears that Californian volume is not satisfying their local market.  All of this seems strange to European buyers who saw a big oversupply last year and so did not expect to receive less fruit and wanted lower prices. If we couple that with lower than expected volumes from Brazil then the Global picture is very different from 2018. European fruit is coming to an end for whites and as per normal reds will go on longer."

Pacific Produce will be out of the market before Namibia or South Africa have any real volume in Europe – Rob can't say if this will be the same for all Peruvians but expects the story to be similar – "If the prices being offered by the rest of the world are good then why would Peru oversupply Europe?" 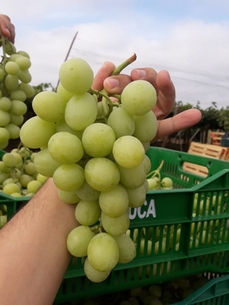 "Quality so far for us has been good on arrival – we had some issues with early whites in the fields which affected our yields but those issues stay in Peru and unfortunately for us it meant a lowering of our exportable volume," explains Rob.

Rob said that the grape is going to be a complicated product in Europe for a few years,"Varietal changes are improving the customer experience which is really positive but at the same time the sheer number of varieties is confusing – if those of us in the business cannot keep track of all the varieties then how can we expect the consumer to keep up!  Price points also make things confusing – older varieties or fruit with colour problems or small berries are filling the lower tier of price points which on one hand is a good thing to use the crop and maybe entice a consumer but on the other hand it could devalue the category."