Producers, cooperatives, industries, and manufacturers united in the Interprofessional association, AILIMPO, have secured EU funding to launch the most ambitious promotion, information and dissemination campaign in its history, which will combine communication, dissemination, PR and advertising actions both inside and outside the internal market. Under the slogan "Welcome to the Lemonage", the initiative has been allocated a budget amounting to 6.5 million euro over the next three years (2020-2022): about 5.23 million will go to internal market programmes (France, Spain, and Germany) and another 1.27 million to third countries (USA and Canada).

European lemons, which are mostly Spanish, have traditionally maintained a position of leadership in EU markets and specifically in Spain, France, and Germany, but competition from third countries is increasing considerably. “It is necessary to promote the positioning of lemons produced in Europe so that European consumers value and appreciate the intrinsic and differentiating characteristics, such as freshness, sustainability, and quality assurance, in efforts to maintain and increase consumption: making this citrus fruit attractive to new generations of consumers” as emphasised by AILIMPO.

The challenges of the information and promotion programme are, namely, to identify European and Spanish lemons with the Mediterranean diet; maintain the leading position for European consumers; increase the visibility of the value of the fresh/processed product in Europe, including freshness, certified quality assurance and sustainability; make European lemons a favourite among consumers over third-country produce; and inform and reach out to new generations, encouraging new uses and consumption trends. 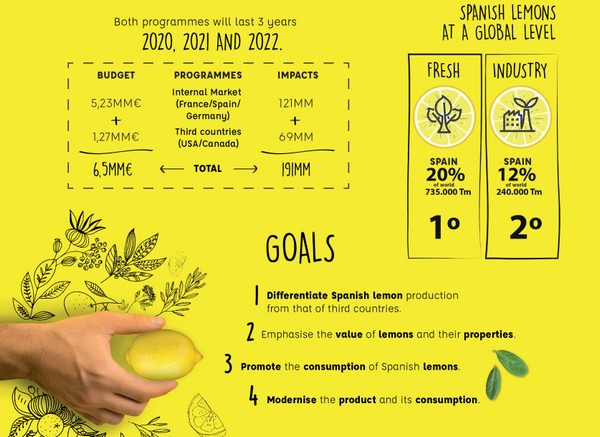 Lemons in Spain
Spain is the world leader in fresh exports and ranks second in the ranking of processing countries, with an annual turnover of 700 million euro and 20,000 direct jobs as well as sales in ancillary industries amounting to more than 250 million euro. The lemon sector also contributes to environmental sustainability, with a positive net balance of 304,840 tonnes of CO2 sequestered per year.

24% of total lemon production in Spain is dedicated to meeting industry demand, 13% for consumption in the internal market, 56% for exports to EU countries and 5% for exports to third countries. In Spain, around 40,000 hectares are dedicated to the production of fresh lemons, housing just over 9 million lemon trees. The Spanish lemon sector is accredited to be able to sell its produce, both fresh and industrial, proved by quality seals such as Global GAP (environmental) and GRASP (social). It is for this reason that Spain can be considered Europe's ‘sustainable lemon producer’. 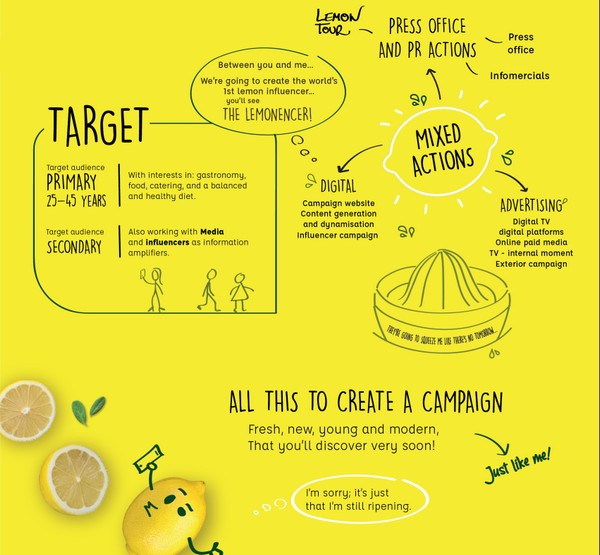 More than 90% of Fresh lemon exports are concentrated in the 28 markets of the current EU. Germany remains the first destination for fresh lemon exports from Spain, followed by France, the United Kingdom, and Italy. These four markets amount to more than 420,000 tonnes, 72% of total exports. Fresh market turnover in the EU amounted to 671 million euro in the 2017/2018 campaign. Exports to markets outside the EU amounted to 34,088 tonnes in the 2017/2018 campaign, and Spanish lemons were consumed in 46 countries outside the EU. This volume represents 5% of the total exports of lemons produced in Spain, with a turnover of around 41 million euro.