While many growers are looking towards new high-tech innovations to improve their farming methods, a banana grower from North Queensland has benefited from the simplicity of a traditional cableway system.

Peter Inderbitzen, from Swiss Farms in Lakeland in North Queensland, told fellow growers that he got the idea from South America, where Australia's yearly volume is grown in a week. The cableway system runs between single rows of plants, and means that bunches are not touched from picking until they reach the packing shed.

"I thought, we'd better go over there and see what these farmers are doing," he said. "After coming back, it was a hard decision, because no-one here was really doing it, and nobody was in favour of it. We have different wages here; almost ten times the wages here compared to there, so they tend to have a few more people. This is not something that has to do with me and design - it is a system out of Colombia, and we have introduced it." 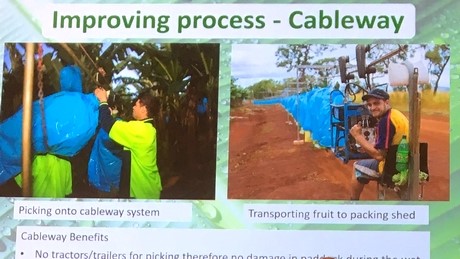 Initially a mechanic and dairy farmer, Mr Inderbitzen made the switch to banana growing 33 years ago. He says other advantages include that the cable is in close proximity and easily accessible for the pickers, and there is less damage in the field caused by tractors and machinery on wet days.

While the cableway, estimated to have cost around $2,000 per hectare, has largely benefited his business, he admits there are a few factors that other growers need to consider when introducing a similar system.

"The disadvantage with the cableway is that you have to re-plant," Mr Inderbitzen said. "The cable goes in between a double row for protection, so you can bag on both sides, and it does not get destroyed by a tractor. But after you put this system in and do everything in a way that they were doing it over there, you don't ever need to re-plant. That got me enthusiastic. We've re-planted half of one farm, and we are continuing to do so as we need to re-plant. I have to say, to the detriment of others in the industry, we made some money when a major cyclone struck a few years ago. We reinvested that money to make things better on the farm. The option of knowing we don't have to plant so often, that's great too. We went to 1,800 plants to the hectare, but dropped back to 1,600." 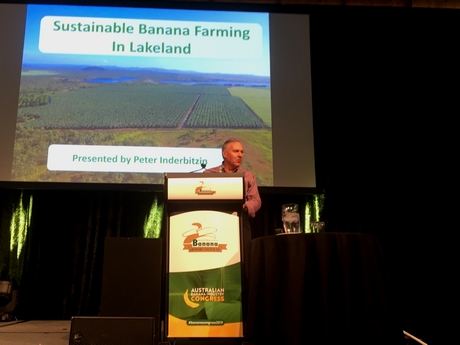 Another part of the business that has Mr Inderbitzen excited is his Next-Gen compost, which has been a key part of his farming over the past 15 years, helping him to revolutionise his farm, save water, save money and achieve better yields. Setting up Shark Recyclers at nearby Biboohra he only transports what he uses to the farm, and in return sends his banana waste and storks back for composting.

"Watering is critical otherwise it gets too dry," he said. "We make about 30,000 tonnes, and in every 100 tonne of compost, there's 1.6 tonne of nitrogen, 500kg of phosphorus and one tonne of potassium. The main input is the green waste from local council, and manures from surrounding areas. Landfill is not the answer, it costs a lot of money, and if we could work towards zero landfill that would be fantastic."

He adds that there are many environmental factors too, especially with both levels of government focusing on nutrient sediment runoff, pointing out that compost will go a long way to combating this problem.

"Compost in my opinion is a no-brainer," Mr Inderbitzen said. "We have increased our organic matter by 7.4 per cent; 1.6 per cent organic matter equals 1 per cent organic carbon. That means a rise of 4.8 per cent. Every one per cent rise in organic carbon on our land means an extra 140,000 litres of water. If you work that out, we are storing an extra 644,000 of water per hectare. That may not seem much at first, but it is substantial. The results are that we have reduced irrigation time from seven days to five days. So, the two important things are that we use 60 per cent less chemical fertiliser, and we have increased our yield. At the end of the day there is improved shelf-life, better tasting fruit, and a healthier banana to eat."