Cost optimization through mergers is the order of the day in the apple industry as well: On October 1, fruit cooperatives Zwölfmalgreien from Bolzano and Emperor Alexander from Laives merged, to form the fruit cooperative Laurin. The new company is one of the eleven member cooperatives of the Association of South Tyrolean Fruit Cooperatives and, together with the VOG, stores, processes and markets around 60,000 tonnes of apples per year, which are coming from some 1,141 hectares. 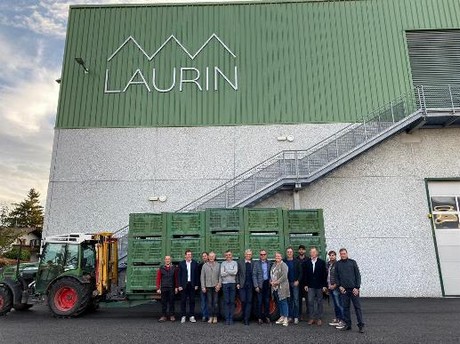 The board of the new Laurin fruit cooperative.

Three features stand out in the Laurin fruit cooperative:
- The average production area of ​​the member companies is high at around 4.8 hectares (average South Tyrol 2.0 hectares)
- The number of members is relatively low with 234 producers, which makes a more personal relationship possible
- The range is very attractive due to the high club shares (25 percent)

At the constituent assembly of the Laurin cooperative, on 4 October, Urban von Klebelsberg was elected chairman and Norbert Paoli became vice-chairman. Chairman of the controlling body is Paul Schweitzer, managing director is Martin Egger.