Largest construction project in the history of Oberhausen:

Edeka Rhein-Ruhr celebrates the start of construction with groundbreaking ceremony

The Edeka trading company Rhein-Ruhr gave the starting signal for the largest construction project in the company's history on October 29th. Together with Oberhausen's Lord Mayor Daniel Schranz and Michael Dufhues, CEO of Bremer AG, Edeka CEO Thomas Kerkenhoff set the groundbreaking ceremony and officially opened the 24-month construction phase. In Oberhausen-Waldteich, the new Edeka logistics center for the Rhine-Ruhr region is being built on 288,000 square meters. 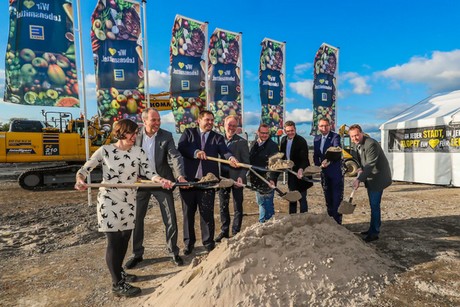 The new building opens up the possibility of aligning the warehouse precisely with the processes of the company. The advantages of the new building include short routes for loading and unloading, large parking areas for waiting trucks and alternative or supplementary areas within the camp for seasonal peaks. The location also benefits from its direct, own connection to the A3 as one of the most important traffic axes in the Ruhrgebiet.

In the coming weeks, the pile foundation for the high-bay warehouse will take place. Afterwards the individual hall parts are built. As early as June 2020, logistics partners WITRON and Cimcorp will be able to begin installing their state-of-the-art automation technology in parts of the warehouse, which will be used for order picking in the future.

Continuous growth
EDEKA Rhein-Ruhr has grown steadily in recent years and was able to increase its turnover from two to five billion euros from 2004 to 2018. Both the strong development of self-employed merchants and successful takeovers have contributed to this. Correspondingly, the volume that is being moved daily has grown. The new location in Oberhausen provides the basis for further long-term growth.

"With the new building in Oberhausen, we as a regional company are helping to further expand Edeka's position as number one in the German food trade. That is why we are very pleased that the development of our warehouse is entering the decisive phase," says Thomas Kerkenhoff.

Strong partnerships as a guarantor of success
The warehouse in Oberhausen is part of a comprehensive reorientation of EDEKA Rhein-Ruhr. At the headquarters in Moers, the company is also commissioning a new administrative and a local supply center around the same time as the warehouse. With the modern administration and the new warehouse in Oberhausen, EDEKA Rhein-Ruhr is optimally positioned for the future.

As part of the groundbreaking ceremony, the company logport ruhr GmbH as seller of the property as well as the city of Oberhausen and in particular Mayor Daniel Schranz and the construction company Bremer AG were particularly grateful to EDEKA Rhein-Ruhr.

Voices of the partners in the construction and planning process
Daniel Schranz, Lord Mayor of Oberhausen, assesses the start of construction as follows: "If a more than 100-year-old traditional company like EDEKA comes to Oberhausen with the largest construction project in its history and invests a total of 200 million euros, we are delighted and a little bit proudly. Because this is certainly also a vote of confidence in the increasing momentum in our city. That's why today is a good day for all of us, and so I sincerely thank everyone who made this possible."

"The construction project in Oberhausen fits in perfectly with BREMER. With its requirements, the warehouse has a very high level of complexity. We feel comfortable with such projects," adds Michael Dufhues, CEO of Bremer AG.

"The transformation of lots into modern logistic areas is one of our core competences. Like the entire logport family, logport V in Oberhausen creates new jobs and contributes to making NRW Europe's most important logistics center with the Duisburg port as its central logistics hub," said Erich Staake, CEO of Duisburger Hafen AG. Together with RAG Immobilien GmbH, this forms the joint venture logport ruhr GmbH.