He notes that in New York State, plentiful rain and sunshine helped grow better apple sizes this year, though there is less fruit on the trees. “We’re picking at or slightly above estimate due to size,” says Allen. 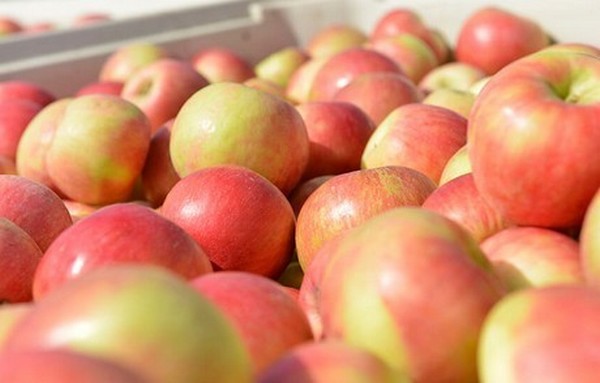 On the West Coast, Michael Saunders of Apple King LLC. in Yakima, Wa. estimates volume is up by 16 percent. “Supplies are coming from Yakima Valley, Columbia Valley and Snake River while competing apples are coming from the same regions as well as Wenatchee and upper Okanagan.”

“We’re going to be up this year,” agrees Jerry Wilkins of Jenks Bros Marketing Group LLC in Royal City, Wa. “The crop size is going to be large and overall quality is good. Our pack outs are much better than last season.”

Wilkins does note that as the season has gone on, sizes have increased. “The size profile is very variety-specific,” says Wilkins. “When we started on Royal Galas, the crop was 125s, 138s, 150s,” he says. “As we moved into the later Galas, the size has pushed up a bit to 88s, 100s.”

Variety notes
As for varieties, it’s a mix as to what varieties are up and what are down. On the West Coast, Fujis seem to be down slightly and Apple King’s Saunders notes that Royal Galas are also down slightly. As for increased supplies, Golden Delicious, Granny Smith, Cripps Pink and Honeycrisp seem to be up. “Cosmic Crisp is also being rolled out by Washington State University,” adds Saunders.

Meanwhile in New York State, Empire is down and Honeycrisp is as well, thought the sizing is better on the latter. “We’re a bit above on Royal Galas and some of the managed varieties such as SweeTango are down while Fujis are as per normal,” says New York Apple’s Allen.

Domestic vs. export demand
Though with such an ample crop, the demand that is starting to grow is welcome. “We started off a little later than normal season wise which always pushes everything. But demand is building nicely,” says Allen.

“Retail demand is driving this right now. The spot market and or wholesale markets are not buying ahead of themselves,” says Wilkins.

Exports factor into the demand picture as well. “There are some export to the Pacific Rim and South and Central America,” says Saunders.

Wilkins adds that while the export business to markets such as Taiwan and Vietnam are solid currently, others are more price-sensitive. He also adds that the Pacific Rim overall numbers are down.

There’s also the bigger question around the role of imports given what this year’s crop looks like. “If those exports aren’t as strong as they need to be, then that’s concerning for the domestic crop regarding a possible oversupply,” says Allen.

The pricing picture
Not surprisingly, prices are softer right now and lower than at this time last year. “Across the board, pricing is down because of the supply,” says Allen. “Honeycrisp is one of the lowest prices we’ve seen ever.”
Looking ahead though, the industry may have to wait to see what the end supply is before it can have a true picture of what the market will look like.

“In the next few weeks, prices will stabilize as harvest comes to a close in Washington as well as mid-West and East Coast,” says Saunders, who has adds that the industry is dealing with a few more challenges right now: namely, the fact that per capita consumption of apples is static and for the market, there are many bi-colored varieties that look alike, which also could be challenging in an attempt to grow the category.