Italy dominated the table grape scene with Italia, Crimson Seedless and Red Globe. After these, Turkish Sultanas and Greek Thompson Seedless followed. Alphonse Lavallée from France and Crimson Seedless from Greece, Spain and Turkey completed the scene. The presence of overseas imports were not yet too pronounced, because Peruvian fruits arrived in very small quantities and exclusively in Frankfurt. 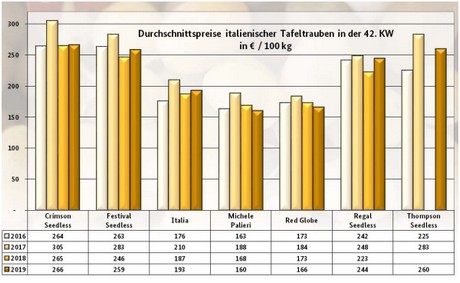 Overall, sales intensified thanks to the late summer weather. Customers focused on bright and seedless products. Since supply and demand mostly balanced each other out, the prices often remained at the same levels. There were some slight increases, since availability could be somewhat limited. The Greek and Turkish seasons slowly turn into the home straight. Greek supplies were already noticeably more limited. In general, the next few weeks will see the change to winter packs, which is likely to increase prices.

Apples
The markets were sufficiently supplied. Sales went on without special highlights. Despite a friendly demand, traders had to lower their prices on various occasions. Elsewhere, however, some offers increased a bit in price.

Pears
Although the quality in general was quite convincing, sales were none too exciting the demand could therefore be met without problems. Prices usually remained at their previous levels.

Bananas
The holidays slowed down the sales noticeably. Because distributors had prioritized provisioning in advance for the reduced transshipment potential, they usually did not need to lower their prices.

Cauliflower
Demand was quite mixed: in Frankfurt and Munich it was rather lively, elsewhere it remained rather restrained. The prices often did not change.

Lettuce
As for iceberg lettuce, the importance of the Spanish lots intensified. For the time being, however, they did not represent any serious competition for the dominant domestic volumes. The quality of German offers fluctuated locally, which broadened their price range.

Cucumbers
Spain was the main seller of snake cucumbers. The market shares of Belgium, Germany and the Netherlands shrank. Although Greek imports gained in importance, they were not available in all markets.

Tomatoes
The favorable Spanish deliveries intensified at certain points, which increasingly put the established leading brands under pressure. To boost the turnover, distributors often had to lower their prices for Dutch and Belgian goods.

Sweet peppers
All in all, prices were down as a result of the extended Spanish shipments. Promotions did not accelerate the placement per se, so sales did not really went too smoothly overall.