The Fruit Attraction trade show kicked off in Madrid, Spain, on Tuesday, 22 October. The entire first day was well-attended. Over more than ten years, this event has grown from a Spanish producers' fair. It is now an international event that is noted in every global fruit and vegetable trader's diary. Last year, many meetings were held outside, thanks to the good weather. It was a lot cooler this year and noticeably quieter outside. 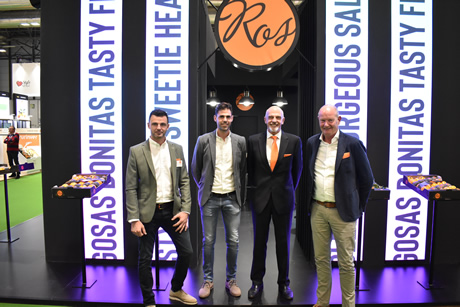 The Spanish stallholders have always been in the majority. The international representation is, however, growing. The trade show is roughly the same size as last year. Many visitors and exhibitors appreciate the fair's timing. The start of the Spanish season is the perfect time to make deals with clients. The citrus marketing campaign is underway. The same is true for greenhouse vegetables, leafy greens, kaki's, pomegranates, and top fruit. The mango season is coming to an end. And the avocado season is just about to start.

This season is somewhat challenging. For example, greenhouse vegetable prices started downright awfully. Last year's season began well, so planting was started early this year. However, Northwestern Europe was not hindered by hot weather. This resulted in the entire supply being lumped together. Yesterday, at auctions, this even led to growers' strikes. 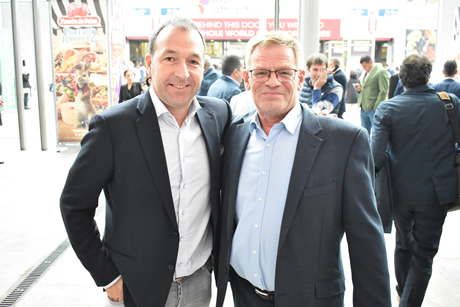 Michael Holslag (Fruberica) and Ger Kingma (Hagé) are very familiar with how things work in Spain.

The Spanish mango season was also not off to a good start, price-wise. Citrus has other challenges - there is a product shortage. Exporters had little to say about the extreme weather that hit parts of Spain. Storms pummelled Murcia, Alicante, and Valencia in September. However, given the flooded fields, there will, no doubt, be shortages of certain products. These include iceberg lettuce and broccoli.

Last year, the expansion of Spanish organic acreage seemed endless. This growth has now tapered off slightly. Apparently, not all that glitters is gold. Businesses are giving product packaging a lot of attention. There is less plastic and more cardboard packaging every year. More people are, however, asking themselves, what environmental benefits this has.

Fruit attraction is more of a relationship fair than one where novelties are presented. Dutch seed company, Bejo, had the new Purple Sprouting Broccoli at their stand. Another Dutch seed supplier, the LimGroup, presented the new strawberry variety, Limvalnera. They did so at the Spanish cooperative, Cuna de Platero's stand. These companies have been partners right from the beginning. This strawberry variety is suited to Mediterranean cultivation areas. 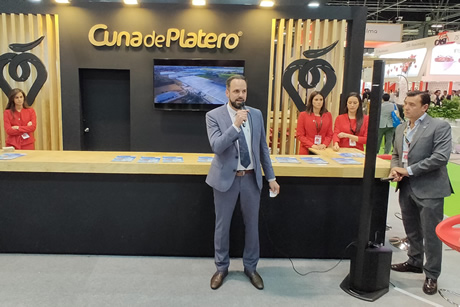 
Spain: More focused on the domestic market
Prices on the European market are under pressure. This pressure means Spanish producers and exporters see a growing potential in their local market. The biggest cooperatives invest heavily in promoting their products on this market. Trops already does this with mangos. Now, Anecoop has spent €1 million on a media campaign to promote kakis. This is besides what they have invested in the DOP Kaki Ribera del Xúquer.

A full kaki crop is expected this year. It should have double as much volume as last year. Spanish exporters have implored the Agricultural Ministry to open new markets with China. They want to send cherries, blueberries, and kakis there.

The Netherlands: full range of fruit and vegetables represented
All the Dutch product groups - from top fruit to full soul vegetables, soft fruit to mushrooms -  are well represented at the trade show. Compared to the fair in Berlin, fewer suppliers are exhibitors. According to the Dutch stallholders, international interest is high. They say there are more visitors from Africa than in other years.

Belgium: Great emphasis on top fruit season
The mood among the Belgian exhibitors was clear early on already. It is evident that the top fruit season has begun in that country. One simply has to look at the assortment the stallholders from Belgium brought along. From red apples to red pears and the latest club varieties to the 'old gold' Conference. They do not only have top fruit. There is also a diverse assortment of winter vegetables. There are more than enough tomatoes of all colors and sizes too.

France: Happy with fair's timing
The France stallholders are well-pleased with Fruit Attraction in Madrid. They were relatively busy on this first day, especially in the afternoon. There are also ample opportunities at this trade show for meeting people. The apple farmers and exporters are happy with the fair's timing. This is also true for the potato traders.

Italy: Interest from Indian visitors
The Italian exhibitors are satisfied too. They reported a lot in interest from Indian visitors. In Spain, Italian exporters sell mainly apples, kiwis, and pears. In Italy, on the other hand, peaches, nectarines, and apricots are being sold. Jingold's Frederico Milanese and Stefano Pezzo from Fruitimprese compare Fruit Attraction to the PMA. They admit there is a lot of attention paid to growers in the United States. They think farmers' incomes should be considered more carefully in Europe too.

Greece/Egypt: Better quality stands
The Greece stallholders consider the trade show's first day to be a success. They had a reasonable amount of traffic. They do, however, expect the second day to be even busier. They are impressed with the stands' quality compared to last year.

The Egyptian delegation has moved away from their relatively boring wooden stands. They use these at just about every event. Instead, they decided to play with color and content. Their stands have a lot more character. 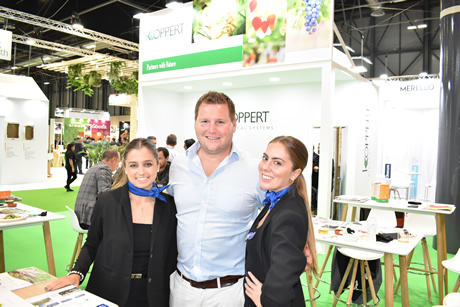 Fruit Attraction's second day started at 09:30. This is the second of the show's three days. It will last until 19:00. We will publish a photo report of the event on Friday.